When Lai-Monté Hunter ’99 was considering college, there was a myth that African American men could not attain a four-year degree. As a first-generation college student, achieving that four-year degree became his immediate goal.

On April 17, 2021, Hunter was unanimously voted the first African American president of the Missouri Western State University Alumni Association Board of Directors.

“I am a vessel – I am the first but not the last,” Hunter said of his appointment.

He has been afforded the opportunity to affect change. It’s beyond being first – it’s about how he’s been positioned to help organizations do something different, to be willing to accept something different. Being an African American leader is a culture shift from what we are used to seeing. He was voted in by his peers because he has demonstrated that he is down for the cause.

But being the first in a position is only the focus temporarily. Quickly, the focus switches to showing up in a way that has never been done before and making sure the organization understands your perspective.“We then open the door for someone else to do it after us,” Hunter said. “We need to see ourselves, so we have an understanding that you value diversity, and we also are thinking about, ‘Hey, I have to do a good job,’ and give myself the grace to do the job.”

Doing the job started early for Hunter. He spent all four years at Missouri Western serving in one capacity or another. He spent four years on SGA, three years as a senator and, in his fourth year, he became the first treasurer for SGA. (Apparently, he is a trailblazer!)

Missouri Western has been full of firsts for Hunter. It is also where he had his first job in higher education. In 2004-2005, he was hired as a first-year instructor, and his office was located near Karl Bell ’92, the director of multicultural education, who happened to be the most influential person during Hunter’s undergraduate years. When Bell was an admissions counselor during Hunter’s undergraduate years, it wasn’t just about the work – it was about the students being successful.

Hunter also joined Alpha Phi Alpha, the first intercollegiate historically African American fraternity, during his time as a Missouri Western student – something he had dreamed of since his sophomore year of high school. Upon joining, Hunter received his shingle, or certificate, of initiation. Bell focused on what he called achieving your “second shingle,” or college degree. Showing mentorship, interest and investing in all of the students, Bell set an example that Hunter models to this day.

To get where he is today, Hunter had to take that first, albeit scary, step away from home.

His mother was sitting on the bed crying as he was packing for college. It was so monumental for him because he did not get it at the time. Now, he thinks about that each time he looks into the face of a parent.

When his mom cried as he packed, he thought, “You knew I was going to college; why are you crying?” He gets it now. Hearing his mother’s voice on the phone, when he heard the memorable double ring of an outside call, that was the motivation to know that he could do it.

“We are an extension of the students’ family and it really means something to me,” Hunter said.

Because of the path that Hunter has blazed, his younger brother and several nephews have all followed in his footsteps and received degrees. That is how overcoming the myth that African American men cannot attain a four-year degree changed the trajectory of his family’s lives.

He was the first but he certainly is not the last. 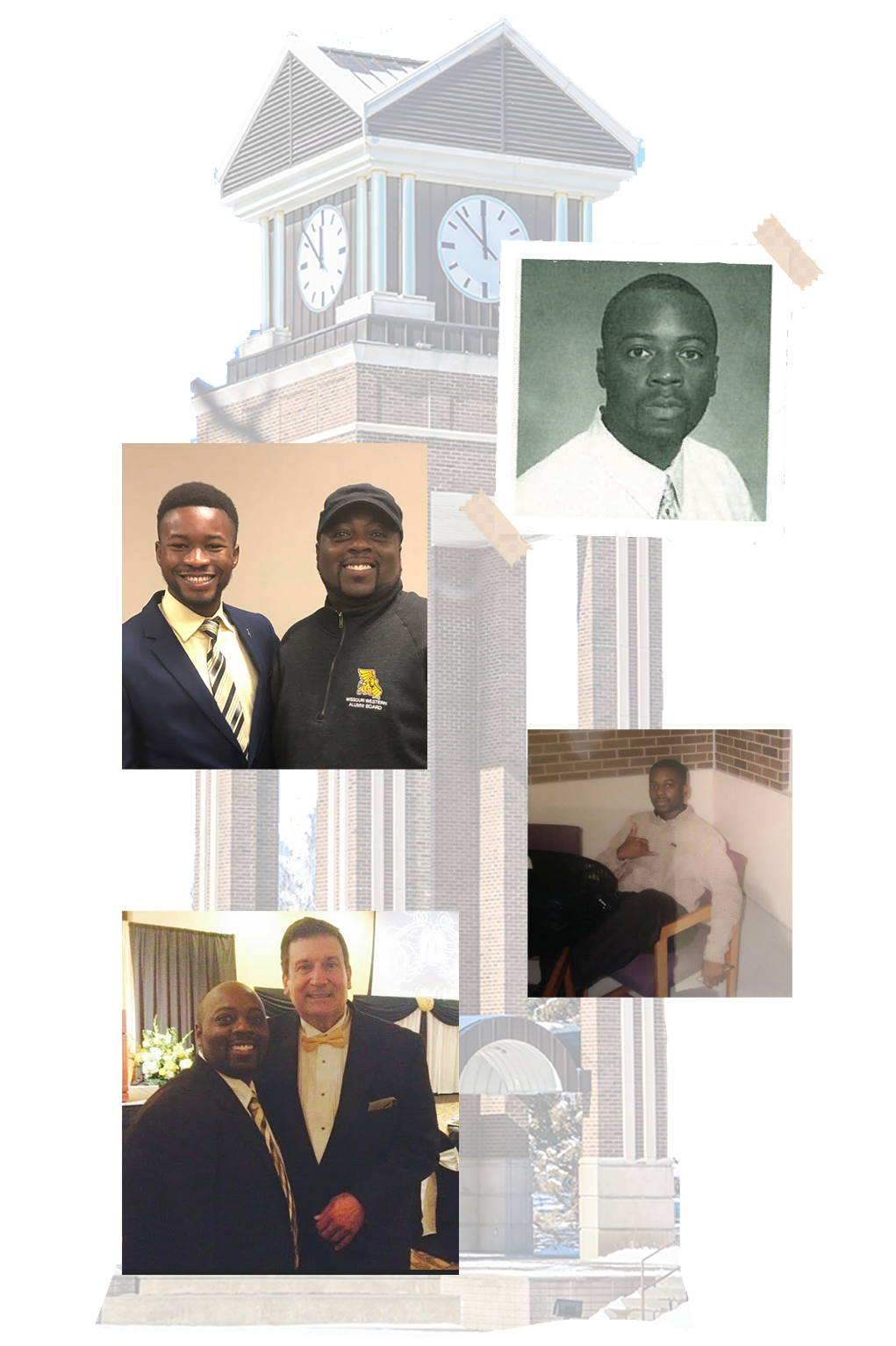 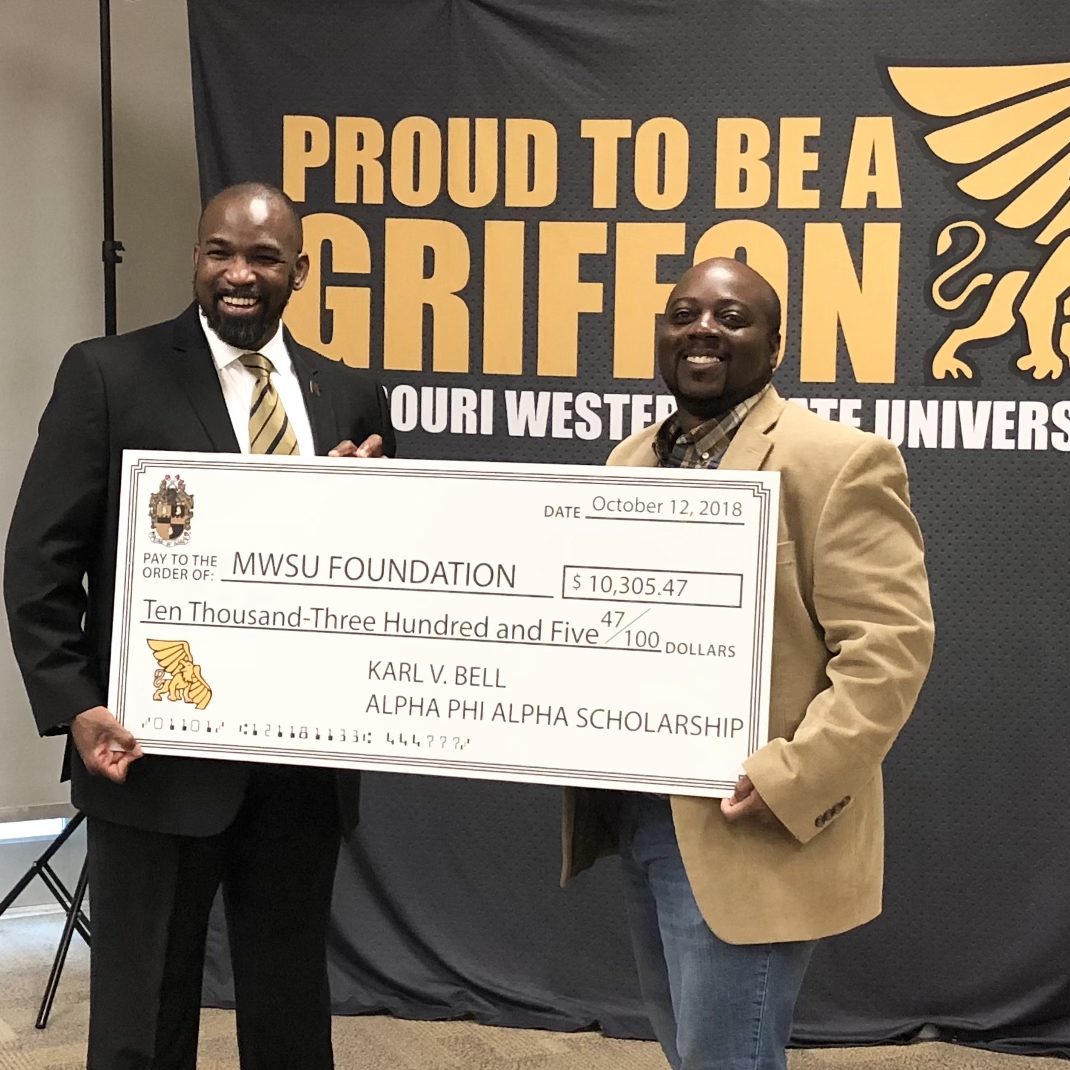 Karl Bell ’92 and Hunter present a check to the MWSU Foundation for the Karl Bell Scholarship. 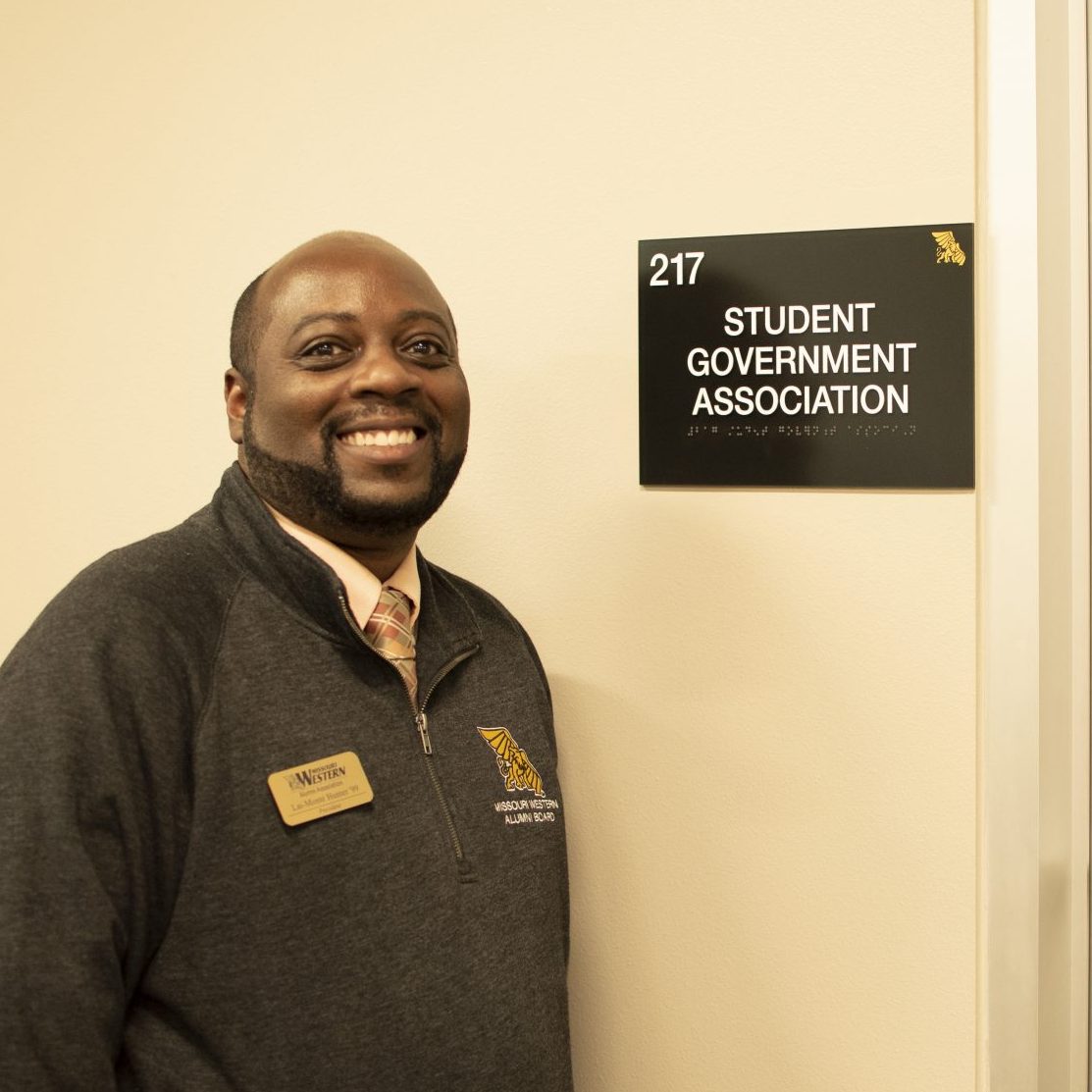