You know that moment.

It’s the making of a legend.

That snapshot of glory that gets etched

in your memory bank for life.

It’s the buzzer beater from half-court, the 23-foot putt for eagle on the 18th hole, or for Parkville native and Missouri Western graduate,

Capt. Keith Hoskins ’88, it was being in the Spratt Stadium stands watching his brother, Tim, six years his elder, make “the impossible catch.”

“The Griffons were needing a big play,” Keith recalled. “We had possession, but the stands were strangely silent. The ball was snapped for a post route and Tim was in the end zone running full speed in one direction,” he explained, drawing the route in the air with his finger. “The quarterback zips a 30-yard pass, but the ball is behind him. Then, somehow, Tim stops, leaps backwards, twisting in

the air, completely defying the laws of physics, to catch the football. And the crowd just erupted!” Keith beamed. “Walking out of the stadium, I remember people still in awe and asking, ‘How did he catch that?’”

This was a moment engrained in Keith’s memory when remembering his brother, Timothy L. Hoskins ’81. Sadly, Tim passed away on Jan. 21, 2021 after a long decline in health. Certainly a legendary play by the wide receiver inducted into the Griffon Hall of Fame in 1990, but according to Keith, Tim’s legacy goes much deeper.

“I learned so much about life and football from Tim. Yes, Tim was an amazing athlete, but Tim truly valued education,” Keith explained. “When he was put in the role of team captain, I remember him telling me stories about the responsibility, setting the example and of being a role model. I watched his transformation … His maturity and confidence sky-rocketed.”

That transformation impressed Keith so much that when it came time, he too would choose to seek his degree and play football for Missouri Western. “Tim loved Missouri Western. He built a brotherhood there. I wanted that, too!” So when Tim’s head coach, Rob Hicklin, offered Keith a full-ride scholarship, he said, “Where do I sign?”

Keith chuckled and added, “Frankly, I wanted to be better than him.”

Keith radiated as he shared other memories of growing up with Tim. He smiled sheepishly as he told of how Tim taught him how to play G.I. Joe at age 7 and how much Tim loved music. “We would dress up and play in our imaginary band. It was the old stuff – Elvis Presley, The Beatles. We would always be playing air guitar or air drums to that music,” Keith shared.

The lasting imprint that those memories of Tim and their shared appreciation for Missouri Western is what inspired Keith to initiate an endowed memorial scholarship in Tim’s name.

“Tim and I both had a tremendous opportunity from Missouri Western in receiving both academic and athletic scholarships. They provided us with the resources, the skill set and the education to get out of college debt free so we could go out and do something with our lives,” Keith said.

Tim completed his Bachelor of Science in Business in 1981 and spent his career in social work, dedicated to the betterment of families and society. He worked for Boys Town USA in Omaha, Nebraska, then later worked at Full Employment Council of Kansas City.

“Tim always loved helping others. He was so loving, caring, giving and a great listener. He was always a sounding board for me,” Keith explained.

Keith graduated in 1988 with an electrical engineering technology degree. Directly after, Keith joined the U.S. Navy, completed Aviation Officer Candidate School and was designated a naval aviator in 1992, joining the elite team of demonstration pilot “Blue Angels” in 1999. He went on to earn a master’s degree in national resource strategy and policy from the Industrial College of Armed Forces in 2012 and became commander of NAS Pensacola in March 2013. He spent 27 years serving our country. Keith currently lives in Pensacola, Florida and is the executive vice president of branch operations for the Navy Federal Credit Union.

“I’ve always wanted to get to a place in my life where I have the resources to give back to Missouri Western. With my brother’s passing, there was a clear opportunity to turn something bad into something good … to help future MWSU students in the same way that we had been helped. So now [in this scholarship] Tim’s legacy … Tim’s name and the Hoskins name can live on forever in his spirit of helping others,” Keith said proudly.

“I believe it’s important that we all remember where we came from and give back,” he said. Keith went on to say that he gives back to his parents in many ways, but explained that when it comes to institutions that have helped to shape lives, “you can’t just pick up the phone and say ‘I love you. Thank you, College!’ No, at the end of the day, it’s a business. It takes resources. It takes people truly remembering and giving back.”

But is “legend” synonymous with “legacy?” By all accounts, Tim is a football legend at Missouri Western. Forty years later, multiple football records still bear his name. But the reception yards and touchdown records pale in comparison to the legacy, the emotional imprint, he left on the people whose lives he touched.

“Legacy doesn’t mean all the glitz, the glory, or all of the accolades that go with the term ‘legacy’ in American culture. No, there are many ‘legacies’ out there – people that made a difference in their families or simply for people they’ve just met,” Keith said. “Legacy is touching the lives of people in a way that forever changes people’s lives.” Tim’s legacy lives on in Keith. It lives on in the lives of the kids he worked with at Boys Town. It lives on in all those he played football with. It lives on here at Missouri Western, and because of Keith, Tim’s legacy will continue to be known to future generations of students at Missouri Western.

For more information on how to contribute to the Tim Hoskins Memorial Scholarship, please contact the Missouri Western University Advancement department at (816) 271-5670. 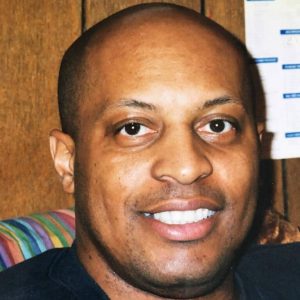 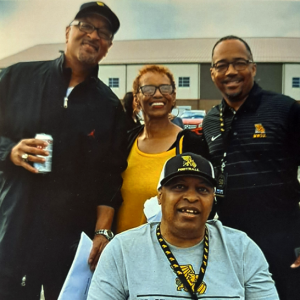 Tim, you were my first big
time player that I got to
come to MWSC. Watching
you play was out of this
world. I know you will be
making big time catches
in Heaven. Your days as
a Griff will always be
remembered. Praying for
you and your family.

Tim, thank you for being
a friend, we had some
good times in college that
I will never forget. I’m so
happy we were able to
reconnect after all these
years. God speed my
friend, I’m sure you will be
catching touchdowns
in Heaven.