From the moment she first stepped on campus to interview for Missouri Western’s vice provost position in 2019, she knew it was a very special place.

“What I believe higher education should be all about is embodied at Missouri Western, and I knew immediately that I wanted to become a part of this institution and the Griffon family.” Everyone she encountered, both on and off campus, was so warm and welcoming. “They say things happen for a reason,” she added, and to Dr. Kennedy, Missouri Western has always felt like where she was meant to be. The University’s history of welcoming students of all backgrounds was one of the attractions. “All any of us need is an opportunity, and that’s what we provide at Missouri Western – the opportunity to achieve one’s goals and aspirations,” Kennedy said.

Once in the role of vice provost, she shifted into high gear immediately. She focused on further implementation of Missouri Western’s strategic plan, including strengthening student success, creating new partnerships and expanding applied learning. Approximately six months after starting at Missouri Western, she was named interim president, and a little more than seven months later, the Missouri Western Board of Governors voted unanimously to name Kennedy Missouri Western’s sixth president. It’s been non-stop “go” ever since.

A university presidency wasn’t on her list of career goals when she graduated from Ruskin High School in Kansas City. Like many teenagers, Kennedy wasn’t sure what she wanted to do after graduation. Even though she and her sister were both enrolled in a local college, she wasn’t completely convinced that she had made the right decision. Meanwhile, her immediate family had moved to Ohio, as her father had taken a new position there. At that point, a little homesick and unsure of her future, she decided to move to Ohio to be with her family. She began school and started working on her undergraduate degree.

Kennedy’s graduate work launched her academic career as she was hired by UA as an assistant professor of social sciences with a primary responsibility to oversee the university’s death and dying courses. She spent 17 years teaching undergraduate students across a variety of majors and participated heavily in UA’s Institute for Life-span Development and Gerontology.  Kennedy also worked as a bereavement specialist for a local hospice agency, providing grief education workshops and engaging in various hospice programming.

Beyond being a professor, Kennedy also held a variety of positions at the University of Akron, which allowed her to develop solid administration skills in diverse academic settings. She served as a department chair, associate dean, dean of two colleges (College of Applied Science and Technology; College of Health Professions) as well as on many committees and task forces, including service in the faculty senate as an executive committee member. Further, Kennedy also served in UA’s American Association of University Professors Akron Chapter, first as a member of the negotiation team for two collective bargaining agreements and then as the Chapter’s grievance officer for a little over three years. She believes her broad experiences have provided her invaluable perspectives from both a faculty member as well as from an administrator viewpoint. “While my background may not be unique, it has given me a rich history and unique skill set to do this job,” she stated.

Kennedy’s personal life experiences, coupled with the firm belief in the importance of lifelong learning, have created her passion for her work today. “I absolutely believe in the transformative impact that education, particularly higher education, can have for an individual, his/her family, and our community as a whole. I’ve experienced it in my own life; I’ve witnessed it in my students’ lives, and I’ve seen the positive reverberations in many communities.”

According to Kennedy, Missouri Western’s relentless commitment to student success and the institution’s dedication to enriching and empowering our students is yet another hallmark of distinction. With this in mind, it’s clear why her goals of enriching the relationships between the University and community are front-and-center in her work.

The opportunity to join Missouri Western was incredibly enticing to Kennedy. Also, after being away from her family for so many years in Ohio, she wanted to get back to the Kansas City area to be closer to her loved ones and friends still in the region. She was attracted to Missouri Western’s position of vice provost because there was a “complete overlap” with academic programs she had worked with previously. Additionally, Missouri Western’s applied learning mission, abundance of opportunities for hands-on learning, and, “just the complete commitment of faculty, staff, and administrators to support student success,” were definitely institutional qualities she could connect with.

Although Kennedy’s time at Missouri Western has been marked by uncertainty, she is ready to look to the future. Kennedy believes that we have many positive areas to be very excited about at Missouri Western. “We’re launching new programs, expanding applied learning, connecting with our community, enhancing our campus grounds, returning to some of our campus traditions that we had to cancel last year. With our students returning back in person this fall, there is just “so much energy building. I’m very eager to see what the next year will bring.”

“Truly, the sky’s the limit for what we can do and where we will go at Missouri Western,” she said. And with Dr. Kennedy in the lead, we intend to soar. 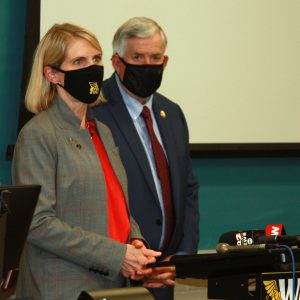