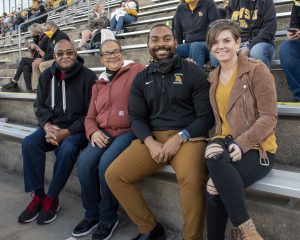 Isaac Collins ’11 says that since at least high school, he has wanted to run his own business. But also from an early age, he knew that business wasn’t just about making money. He describes himself as a “community entrepreneur,” owning and operating businesses but also connecting people in a meaningful way.

“Growing up, we didn’t have a lot of money, and things weren’t handed to us,” Collins said. “However, one thing that was given to me freely was love. I have two very amazing parents; there was no shortage of love in our household. We also saw a slew of people who helped us out of our circumstance that we were in, so that was celebrated in my family. Helping other people was celebrated, instead of making money or getting over on the other guy.”

Collins, the owner of three Yogurtini frozen yogurt shops and a nonprofit organization in the Kansas City area, says that sense of community and helping others is fundamental to everything he does.

“My parents told me, if you’re going to do something, it needs to be something that’s going to help someone else. So that’s my philosophy,” he said. “I bring that to how I run my businesses – choosing people over profits.” 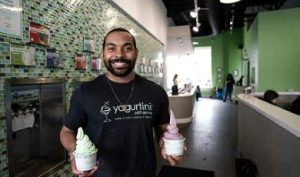 “I do believe in a just society that holds equality and justice to a high standard,” he said. “This isn’t radical stuff that I’m talking about; I’m just saying ‘all opportunities for all people.’”

Collins said he’s engaged in bringing awareness through protests, marches and contacting government officials. He’s also been working to get people registered to vote – “marginalized communities aren’t being heard because they aren’t voting.” He says one of the most rewarding things he’s been involved in has been working with three partners to lead a monthly diversity and inclusion seminar on Zoom.

While some business owners might be reluctant to speak out for fear of alienating potential customers by rocking the boat, Collins said it was important to him to raise awareness.

“As a black man, I am still looked at like I am black first, before I am a business owner,” he said. “If you aren’t black, you may not understand or see that, but that’s my experience. If I am not in my business, I get treated very differently.”

Which is not to say that his status as a business owner doesn’t have its advantages. Collins says his voice is heard when others may not be.

“I’m fighting for people who don’t have a voice to fight for themselves,” he said. “And luckily, I’ve had success where I’m at a lot of these tables, and when I speak, people listen to me. That’s been an amazing thing, to be able to be heard in this time.” 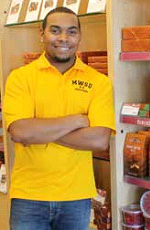 Isaac was awarded a Rocky Mountain Chocolate Factory store in 2012.

That success was not overnight. After completing his football career and graduating from the Craig School of Business in December 2011, Isaac moved almost immediately into the entrepreneur phase of his life. He was offered a $40,000 a year salary out of college, but chose instead to run the Rocky Mountain Chocolate Factory store in St. Joseph. At the same time, he was enrolled in the Applied Entrepreneurship class that gave him the chance to own his own store. In 2012, he was awarded a Rocky Mountain Chocolate Factory store in Williamsburg, Iowa.

Collins said he faltered out of the gate, but ultimately succeeded simply because he stuck with it.

“You don’t fail until you quit, so I just kept learning, learning, learning,” he said, reading books and leaning on mentors like Steve Craig, the benefactor who helped create the applied entrepreneurship program. “It took a couple of years before I would call myself a decent entrepreneur, and now eight-and- a-half years later I think that I’m great. And not great as in, hey, I’m making a ton of money, but great in the sense that I am an entrepreneur of character and integrity and perseverance because of those hard times I faced in year one.”