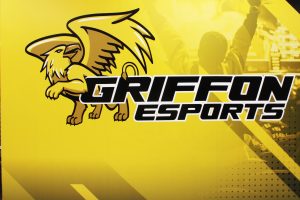 In its inaugural season, the Griffon esports program has quickly grown to four varsity teams, two clubs, and a training room, in addition to the esports stadium which is taking shape in Blum Union.

Esports by definition is a multiplayer game played competitively, and has grown in popularity with esports programs popping up on multiple college and university campuses in recent years. Esports can serve as an alternative for students not interested in traditional sports, as well as create a community where students can feel involved on campus, make friends and learn how to work as a team.

In addition to the 25 varsity players, the esports program also formed two club teams for any student wanting to spend time training and meeting with students interested in the same video games. Last semester, there were 20 students participating at the club level for the games Super Smash Bros. and Valorant, with a potential Call of Duty club being formed in the near future.

But those participation numbers are just the beginning of the impact felt across campus, as nearly 200 students engaged through the Discord server and by following the esports Twitch stream.

The varsity teams have competed in seven competitions ranging from qualifiers, leagues, to one-day tournaments and racked up an impressive season.

The League of Legends team pulled off a brilliant first season, finishing their league with the second highest ranking. League of Legends is a game where each team has five players focused on the goal of defeating the other team and protecting your team’s crystal, and when it’s destroyed the other team scores a point. The game is slower-paced and focuses more on strategy with over 140 characters to choose from. Thanks to the team’s hard work, they made it to the championship where they competed all the way to the semifinals before being eliminated.

The Rocket League team, through all their hard work in their league, was invited to an invitational tournament sponsored by Maui Esports. Rocket League is a game resembling soccer but with the catch that you play as a car. Using precise aiming and control of the car is key to this high-speed game. In the tournament the team went undefeated up until the final match where they went 1-2.

Fortnite ended their league in the top 25, which qualified them for the championship that took place in December. Fortnite is a game focused on crafting, shooting and strategy where squads compete to be the last person standing. Unfortunately, due to a technical error on the league’s end, one player wasn’t able to compete, preventing the team from competing in the championship matches.

Last but not least, the Overwatch team competed in a league as well. Overwatch is a strategic shooter game where teams choose between 32 characters and compete in multiple game modes, whether it be gaining points for defeating other players, capturing the flag, or protecting their moving payload.

Esports Director and Head Coach Christian Konczal explained that the Overwatch season didn’t have the greatest start, but he believes the team will be in a good position to start the next season.

“Overwatch did not place very well as they struggled in the beginning of the season but came back with a vengeance towards the end,” Konczal said.

Graduate assistant Luke Theis said, “We’re proud of everyone who stuck it out with us and are coming back for spring 2021 where we hope to take a step even further with the program.”