Professor and students create “Old St. Jo”
Toby Lawrence, assistant professor of cinema, and his cinema students are creating an ongoing episodic documentary series about the history of St. Joseph called “Old St. Jo.” They aired the first episode last fall:  “The Fur Years – 1799-1843.” It can be viewed here.

Phase II of the project consists of live-streaming multi-camera broadcasts to Facebook, which will then be archived on YouTube. Students are filming stories from the community and broadcasting from a studio downtown.

“We are so excited to have the opportunity to engage the students with the community, and to share these stories,” Lawrence said.

Chiefs will return to campus this summer 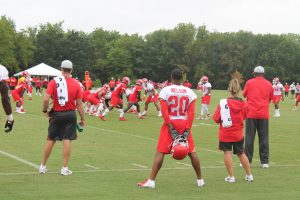 The Kansas City Chiefs inked a three-year deal to make Missouri Western the home of Chiefs summer training camp through the 2022 season. The agreement includes an option to extend the partnership an additional two years after 2022.

As part of the new agreement, Missouri Western is developing a new seating area on the north end of the existing practice fields to better accommodate Chiefs fans who are viewing practices. (Due to COVID-19, there may be no public practices in 2020.)

The Chiefs have held training camp on campus every year since 2010, when the Chiefs returned its training camp to the state of Missouri for the first time in 20 years. Dates and additional details for 2020 Chiefs training camp will be announced on chiefs.com in mid-June.

National leadership society thrives on campus
Senior Jakob Durham believes that everyone has the potential to be a good leader, and he wants to create as many as possible before he graduates this month. Durham, a history major, joined the National Society of Leadership and Success in the spring semester of his freshman year, and has been helping develop leaders through that group ever since.

He now serves as president of the group, which holds leadership training workshops to learn different communication and leadership styles and how to adjust to each person’s style. They also hold networking events and engages in community service for Habitat for Humanity and the Noyes Home each semester. In November 2019, 25 students were inducted into the group to recognize their leadership training during the fall semester.

“I like seeing people of different backgrounds working together for something bigger than themselves,” Durham said. “There’s always a need for a group like this.”

The group’s advisor is Derek Evans. 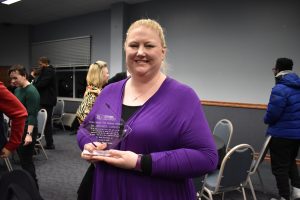 The community member recipient was Rich Nolf, who served as director of the St. Joseph Museums for over 30 years; the employee recipient was Dr. Jennifer Jackson, who is a faculty member in the Department of Communication and Journalism and the student recipient was Leo Grantham, who 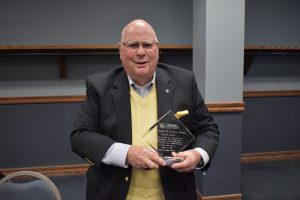 is an advocate for many social justice issues. Spoken word artist Kyla Lacey was the special guest speaker.

Students may apply if they have earned 90 undergraduate credits, be degree-seeking, have a minimum GPA of 3.0 and receive approval from the director of their graduate program and the Graduate School dean.

Dr. Susan Bashinski, Graduate School dean, noted that this is a great advantage for students. If an undergraduate senior was accepted into the accelerated program and earned 12 hours (six per semester), they would graduate with their bachelor’s degree and have 12 hours toward a Missouri Western master’s degree.

In her role at Missouri Western, Dr. Kennedy will focus on a number of elements of Missouri Western’s strategic plan, Pathways to Excellence, including strengthening student success, creating new partnerships and expanding applied learning.

Dr. Hannah Piechowski was named associate vice president for Student Affairs and dean of students in the fall of 2019. She had been director of Student Transitions and Parent and Family Programs at Transylvania University in Lexington, Kentucky.