Lauren Prywitch ’14: Behind the Scenes

Lauren Prywitch ’14: Behind the Scenes

Lauren Prywitch ’14 always knew she wanted to work in television on one of the coasts. Her path to get 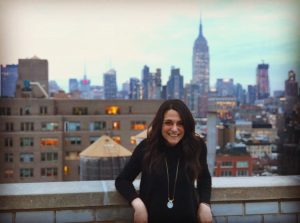 there may have been “kinda crazy,” she says, involving several internships, radio station sales and Boston Red Sox Radio, but she made it.

“I knew I wanted to do what I am now doing, but I just wasn’t sure how to get into it,” she said.

Her brother was working in television in New York, and last year, he introduced her to someone who could help her reach her dream. While she was working in Boston, she was hired to work two days on “Wild ’n Out” for MTV, and the next day, someone from “Chopped” called with a casting and recruiting job offer. So she moved to New York City and for about the next six months, she recruited chefs to serve as judges on the culinary competition show and worked on the set when they filmed three seasons.

From there she landed an associate field producer role for an MTV pilot, and worked on “What Now?” which covers the lives of the TLC’s “90 Day Fiancé” couples after they said I do. Then, this past March, she moved to Los Angeles and worked as a segment producer for an MTV show that aired in August. (When I interviewed her, the show was yet unnamed.)

“I love when I get to work with cast members and producers,” she said. “It’s great to work hard and then watch the show. Television is very exciting.”

And work hard she does. Most days on the “Chopped” set began at 6 a.m. and ended around 8 p.m. When she was travelling for MTV’s pilot show, some work days lasted 17 or 18 hours.

“Sometimes it’s hard to maintain a personal life,” she said with a laugh.

But her college experience was good training for her current busy schedule. Prywitch says she didn’t have “the best high school experience,” so she came to Missouri Western determined to get the most out of college. Her solution was to get involved.

“I had so many opportunities. I kept applying for things and just kept getting them,” said Prywitch, a native of St. Louis. “But it felt right.”

She served as an ambassador in Admissions, a member of the Alpha Sigma Alpha Sorority, a Griffon Edge leader, a member of the Homecoming steering committee and the Student Government Association, to name a few. She was also vice president of the Panhellenic Association and participated in the Barbara Sprong Leadership Challenge.

And now, she’s loving her busy television life hoping to be a producer someday. “My heart is in TV.”