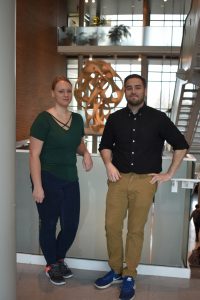 So how did seniors Merle Phillips and Rebecca Prest spend their summer vacations? Both were selected to participate in the Research Experience for Undergraduates program, where they conducted research for 10 weeks at two top-notch research institutions. Phillips, a chemistry major, worked in a research lab at Harvard University in Boston and Prest researched at Rensselaer Polytechnic Institute in Troy, New York.

Prest, a native of Bethany, Missouri, conducted research using Rosetta Commons software for computer-based protein modeling, and completed the program in Washington state where she presented the results of her research.

Phillips, of St. Joseph, Missouri, is conducting genetics research at the Buratowski Lab at the Harvard Medical School.

And why were Phillips and Prest selected by top-notch research institutions? Because they are, well, top-notch students. Knowing how difficult it was to be selected for an REU, the two students did everything right since they arrived on campus – tutoring, mentoring, working as a lab assistant, volunteering and serving as officers for student organizations, earning good grades and conducting research projects with faculty members. Additionally, they have both presented their work at several national conferences. Prest also spent the summer of 2018 conducting research in Costa Rica with Dr. Carissa Ganong, assistant professor of biology, and another student.

“We just utilized everything that is available to all students,” Phillips said.

Phillips attended Missouri Western for one year right after high school, and in his words, “I crashed and burned. I was a total failure.” When he returned after working a few years, he was ready to start over. And on his first day of a chemistry class, he knew that would be his major.

He applied to Northwestern University, Cornell University and Harvard, and was accepted to all three programs. He chose Harvard for two reasons: one, because of the vast amount of research opportunities, and two, because he hopes to attend graduate school there. He believes the REU will help him decide his doctoral focus.

Prest, a biochemistry and molecular biology major with an American Chemical Society certification, was accepted in two other REUs, as well. She picked Rensselaer because it seemed like the best fit for her. She plans to study biophysics in graduate school.

Both will receive a stipend, a residence hall room and paid travel expenses.

“It’s awesome,” Prest said. “It’s something I want to learn about and do, and it’s an awesome university. I’m super excited I get to be a part of this.”