As a child, Bob Wollenman often played in an old barn south of Mitchell Avenue, never dreaming that someday St. Joseph would get a four-year college with a large campus that included that barn.

But that’s just what happened. Bob and his wife, Connie, both started college at the St. Joseph Junior College downtown and moved to Missouri Western’s new campus when it opened in the fall of 1969. They graduated with bachelor’s degrees in 1972, have had successful careers, raised three children, and have been great supporters of Missouri Western all along the way. 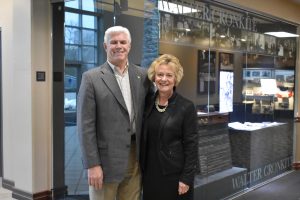 Bob’s family owned several service stations and had a fuel distribution business, so he worked in the family business while earning his marketing degree. In the summer of 1969, he was working a shift at a station in Rushville, Missouri when Connie came in, and after she left, he told his co-worker that he wanted to date her. They were married in 1971.

After graduation, Bob continued to work the family business until 1997 when he went out on his own. One of the properties he took over at the time was the Deluxe Truck Stop in the stockyards area in southside St. Joseph.

Bob said in the late 1990s, the south end was at a low ebb economically, but was beginning to “reinvent itself.”

So he reinvented his business by offering more and more services to local industries. Today, the business offers exterior truck washing and interior tank wash outs for kosher and food grade, livestock, hoppers, refrigerated trucks and inedible tanks, along with a passenger and light truck and truck tire centers. They wash about 130 vehicles per day.

“We’ve been blessed. St. Joseph has been good to us,” Connie said.

Bob said he also feels blessed and thankful for their customers who have become friends. “They are truly the investors in Deluxe Truck Stop’s success,” he says.

Connie, from the Rushville area, graduated with a degree in medical technology. She worked mainly in that field throughout her career, and retired from Children’s Mercy in Kansas City, Missouri in 2013.

Her long hours and commute while raising a family never gave her an opportunity to join community organizations, so when she retired, Connie took advantage of her extra time to get involved. One of the groups she joined was the MWSU Ambassadors Board, and Deluxe Truck Stop is a Hall of Fame sponsor of the group’s Night at the Ritz every year. She has also been involved in several other community organizations, including a member of the Noyes Home for Children’s Board.

Along with several community organization’s boards, Bob serves on the Craig School of Business’s Advisory Council and the MWSU Foundation Board of Directors, and spent this spring semester serving on the search committee for the new University president. In 2017, Bob was named Entrepreneur of the Year by Missouri Western’s Center for Entrepreneurship. He is also currently the chair of the board for NATSO, a national organization which represents travel plaza and truck stop owners and operators.

“I think being a member of the St. Joseph community and now having the time and financial resources, it is our Christian path to give back to the community,” Bob said. “And Missouri Western is a big part of that community.”