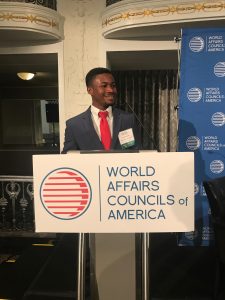 Missouri Western wasn’t really on Engoma Fataki’s radar as a choice for college, but when he came for a visit and saw a video that featured the University’s tagline, “Everything is possible,” he knew this was the place for him.

“That got my attention,” Fataki said. “All I wanted to do was to make an impossibility possible. That was my dream.”

See, Fataki didn’t have what most people would consider a normal childhood. The oldest of nine children, Fataki was born in the Democratic Republic of Congo and lived in refugee camps in four different African countries until he came to the United States at 19 years old. He thought he would have limited opportunities, because that was all he had ever known.

Fataki arrived on campus in fall 2016, ready to embrace university life and learn as much as he could, and find out for himself if everything really was possible.

His childhood experiences led him to choose two majors – political science and international studies – and a minor in peace and conflict studies. Even as a child, Fataki realized that the actions of leaders is what led to refugees being forced to leave their homelands. He wants to be a leader in the United Nations or the federal government and change that.

Since coming to Missouri Western, he has found the opportunities as he had hoped.

Fataki spent two months of the summer of 2017 as an intern for a nonprofit organization in Washington, D.C., meeting with members of Congress and advocating for refugees and immigrants.

“Because I spent my childhood as a refugee, I was trapped in the mindset of thinking I had no opportunities. But the internship helped removed that mindset,” he said.

When he was a sophomore, he attended the national student leadership forum in Washington, D.C. that coincided with the National Prayer Breakfast. He also attended the Missouri Governor’s Student Leadership Conference in Jefferson City two different years.

And last fall, he was nominated by the International Relations Council in Kansas City and selected as one of only 25 students from around the country to attend the World Affairs Councils of America’s national conference in Washington, D.C. Fataki met several diplomats and ambassadors from around the world and United State political figures to discuss the United States’ foreign trade policy issues and the country’s role in the world.

This past March, he was elected president of the Student Government Association for 2019-20.

He said he has enjoyed his trips to the nation’s capital to experience the history and the culture along with the outstanding internship and conferences.

“No matter your differences, as long as you work hard, there is a possibility to succeed,” he said. “At Missouri Western, I have been given the chance to embrace opportunities. And I don’t think I would have had those opportunities at other places.”

The magazine is published three times per year – January (Winter), May (Spring), and September (Fall).