Student Andrea Gordon is all about helping others, and because of her passion to serve, she was one of only 30 students selected nationwide as an Oxfam America CHANGE leader. This past summer, she spent a week training in Boston to learn about Oxfam and its initiatives and attending workshops on leadership and advocacy.

“It was a great opportunity for me to meet so many amazing people,” she said. “And it was an honor to represent Missouri Western.” 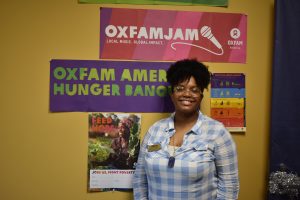 Throughout the week, Gordon learned that Oxfam is a global organization working to end the injustice of poverty. She said she especially enjoyed the small group discussions that were part of the week.

“The best part was the bonds we built,” she said. “We all skipped the awkwardness stage and everyone opened up right away.”

The sophomore cinema and marketing double major applied for the program because of the encouragement of Shana Meyer, vice president of Student Affairs. “Shana knows I’m very involved and very vocal,” Gordon said with a laugh. The application process included a written application and a video interview.

By the end of the CHANGE week, Gordon had created a plan for this school year that she brought back to Missouri Western. Since then, she coordinated an “Oxfam Jam” at Homecoming, held a hunger banquet in November and spearheaded petition drives for issues regarding poverty and more. Oxfam has been supporting Gordon throughout the year with advice, materials and information.

Oxfam suggests that the CHANGE leaders start an Oxfam club on their campuses, but Gordon has bigger plans. She serves as the director of GriffsGiveBack, the central office for volunteerism on campus and in the community, so that gives her the perfect opportunity to promote Oxfam. Gordon says she doesn’t want to stop with just a club; she wants the entire campus community to become involved and informed about Oxfam.

“I have always seen a need to help people, and that’s what makes me happy,” she said. “People need to get active and get involved. Just do it because it’s the right thing to do.”