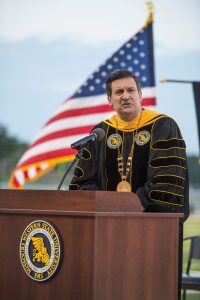 In August, Dr. Robert A. Vartabedian, Missouri Western’s president, announced his plans to retire on July 1, 2019.

Dr. Vartabedian and his wife, Dr. Laurel Vartabedian, plan to spend more time with family, including their children and grandchildren in Texas.

“Bob and Laurel’s contributions to Missouri Western and the St. Joseph area will be felt for many years to come,” said Dave Liechti, chair of the Board of Governors. “Bob is a great leader and tireless worker with a vision and commitment to advance the University. Both he and Laurel have immersed themselves in the community and been great ambassadors for Missouri Western. The bar is set very high for whoever follows.”

On July 1, 2008, Dr. Vartabedian became Missouri Western’s fourth president since the institution became a four-year college, and he is the longest-tenured current president among public universities in Missouri.

In October, the Board of Governors selected AGB Search from Washington, D.C. to serve as the search firm for Dr. Vartabedian’s replacement.