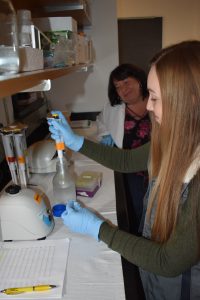 As a SURF, she and her mentor Dr. Csengele Barta, associate professor of biology, spent the summer working on her research project, studying the role of isoprene in plant development.

“We were very excited when she was selected,” Dr. Barta said. “She is an exceptional student, and receiving this award is an honor and a great success.”

“I was pleasantly surprised when I was selected,” said Prawitz, a biology health sciences major from Kansas City, Missouri. “Science research is very exciting, and I love learning about the diverse aspects of biology. Research reinforces and enhances what I learn in the classroom.”

Prawitz’s project focused on studying how the capacity to emit isoprene, a volatile molecule, affects the aging process in plants. She worked with velvet bean, a semi-invasive species. Plants for the project were grown under three different temperature and light environments in the three climate-controlled sections of the department’s greenhouse (adjacent to Agenstein Hall) to regulate the production and emission of isoprene in the plants. Interestingly, Prawitz’s results showed a substantial extension of the plants’ lifecycle, which extended her project beyond the expected 10 weeks.

Dr. Barta has studied the role of isoprene in plants for several years. Her research on oak trees indicated that strong isoprene emissions may delay the aging of leaves in some species, and Prawitz’s project was built on those findings. However, unlike the earlier field project, Prawitz’s approach offered better environmental control over the plants.

Dr. Barta said Prawitz, who plans to be a pediatrician, also learned a lot about the scientific process this past summer as she designed her experiments and used critical thinking to analyze and interpret her results.

Dr. Barta worked with a large team of students on three research projects during the summer, and along with her SURF project, Prawitz also collaborated with other students on Dr. Barta’s other ongoing projects.

One involved isolating the gene encoding for isoprene synthase – the enzyme catalyzing the production of isoprene in plants – from Missouri pin oaks, for the first time. Dr. Barta and her students, including Prawitz, initiated this project during the summer of 2017 and isolated a portion of the gene at that time, but the big breakthrough came this past summer, when they sequenced the full gene. They submitted the sequence to the Gen Bank with the National Center for Biotechnology Information.

Dr. Barta and 15 undergraduate students, including Prawitz, published a paper last year in Plants, an international science research journal, and Prawitz is working on a paper from her SURF project to submit for publication. She and three other students presented the results of this past summer’s research at a convention in Montreal, and will present again at Plant Biology 2019 in San Jose, California this summer.

Dr. Barta said she has conducted research with over 35 students since she began teaching at Missouri Western six years ago, and all have presented their research at conferences.

“Research broadens students’ perspective, is a valuable experience in their preparation for future careers in science and contributes to their better understanding and appreciation of the natural world surrounding them,” Dr. Barta said. “I am very proud of all my students and their successes.”