1970s
Dr. David Belt ’73, retired biology instructor at Metropolitan Community College-Penn Valley, had a tropical plant named after him – Anthurium davidbeltianumcroat. Dr. Belt was volunteering for the Missouri Botanical Garden under Dr. Tom Croat when the new species was discovered in Peru in 2006. He taught at MCC for 16 years.

Sue Owen ’73 is the head women’s golf coach at Peru State College in Peru, Nebraska. She had been teaching and coaching at Rock Port (Missouri) High School.

Gayle Myers ’74 received the Wright Brothers Master Pilot Award. Less than one half percent of all certificated pilots have received the award from the FAA. A thorough search of FAA records revealed no accidents or violations in 50 years of corporate and airline flying totaling over 16,000 hours. He currently is flying a Jetstream for Alpha Air out of Joplin, Missouri.

Dr. Joella Hendricks Mehrhof ’75 retired after 32 years as a professor in the Department of Health and Physical Education at Emporia State University, Emporia, Kansas. Besides teaching, Dr. Mehrhof served as president of the faculty, graduate advisor, and department chair, as well as in many other administrative roles. She was honored with the highest award given to an ESU faculty member when she was named a Roe R. Cross Distinguished Professor. Professionally, she has authored more than 40 books and journal articles and has received national awards for mentoring, teaching, and service. Dr. Mehrhof was named a Missouri Western Distinguished Alumni in 1998.

Gary Schermerhorn ’79 and Cecilia Irenosen Iboaya-Woods were married June 23, 2018 in St. Joseph, Missouri. Gary is the owner and operator of Benders Prescription Shop in St. Joseph.

Dr. Melissa Stuart ’79 was appointed chairman of the Microbiology/Immunology Department at A.T. Still University, Kirksville College of Osteopathic Medicine, in May 2018.

1980s
Dr. Debra Parker Oliver ’81 received the 51st Faculty-Alumni Award from the Mizzou Alumni Association. Dr. Parker Oliver earned her master’s degree in social work and a doctorate’s degree in rural sociology from the University of Missouri-Columbia. She started Hands of Hope Hospice in St. Joseph in 1990. She is currently a professor at MU and has published 170 papers.
Jeffrey Stubblefield ’83 was hired as Parks and Recreation Director for Maryville, Missouri.

Susan M. Ball ’85 was appointed to the Board of Directors of U.S. Concrete, Inc. of Euless, Texas.

Richard Todd ’86 has been working as an Insurance Financial Examiner at the Kansas Insurance Department since March 2016. He says he has been back to campus more frequently of late because his nephew, Bryce Steffens, is a Griffon football player.

Angela Hickman Podany ’88 earned a Master’s Degree in Curriculum and Instruction from Concordia University in Nebraska in 2018. She has been teaching special education in a middle school in Omaha, Nebraska for the past five years.

1990s
Stacia A. (Hellerich) Studer ’92 is serving as assistant principal at Bode Middle School for the 2018-19 school year. For the past 16 years, she has taught English at Bode.

Eric Montegna ’93 was accepted for membership into MENSA in 2017.

Catina (Green) Dreyer ’99 is the assistant principal/athletic director for Savannah (Missouri) Middle School. She taught Spanish for 19 years, the last 13 in the Savannah School District. Dreyer earned her master’s in administration from William Woods University in 2011.

Terri Sallee ’99 participated in Miami University’s Earth Expeditions global field course in Baja (Mexico) this past summer, where she studied at Bahia de los Ángeles, a UNESCO World Heritage site and biosphere reserve located on the Sea of Cortez.

2000s
Stephanie Paasch ’01 published book one and two of a children’s picture book series, “The

Adventures of Sparklepants.” Book one, “Sparklepants: Moving Day,” is available on Amazon or at Main Street Books in St. Charles, Missouri. Book two is “Sparklepants: Terrific Tea Party.” The series will feature 29 stories about Ellie Marie and her dog, Sparklepants.

Bradley Kurz ’02 was named one of 20 Under 40 by the Quincy (Illinois) Herald-Whig. The financial advisor for Edward Jones is very involved in his Hannibal, Missouri community.

Justin Collins ’06 is the principal at Gallatin R-5 middle school.

Elizabeth Bertram ’15 is participating in a one-year clerkship with the North Dakota Supreme Court. She earned her Juris Doctorate from the Sandra Day O’Connor College of Law, Arizona State University, in May 2018.

Brooke Chestnut ’17 is the superintendent of park operations for Lee’s Summit Parks and Recreation.
Marylin Huskamp ’17 mended a vintage quilt that will be featured in the Quilting Arts Magazine February/March 2019 publication. She also had her Kansas City cityscape quilt/painting 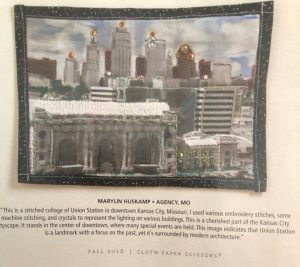 swore him in, and Robert wore his father’s dress blues from when he was a new Second Lieutenant in the Marine Corps. He reported to the Basic School at Marine Corps Base Quantico, Virginia in October.

In Memoriam
We remember those who have passed away. If you want to include someone in this listing, please call (816) 271-5651, mail the information to Diane Holtz, Missouri Western State University, 4525 Downs Drive, St. Joseph, MO 64507, or email holtz@missouriwestern.edu.