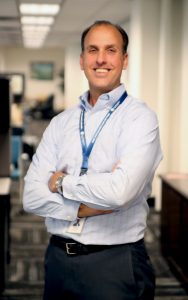 When Shawn Malone ’87 was in high school trying to figure out how he would pay for college, his sister, who was a Missouri Western student at the time, told her chemistry professor, Dr. Len Archer, about him, and Dr. Archer helped Malone receive a chemistry scholarship that paid for his freshman year.

He earned a three-year ROTC scholarship to pay for his last three years of college, graduating with a chemistry degree and a 2nd Lieutenant commissioning in the Chemical Corps of the U. S. Army.

Malone said he appreciated Dr. Archer’s role in getting him to Missouri Western, and also Dr. Larry Lambing, whom he collaborated with on research projects.

“I think the most important part of Missouri Western was its smaller size so it allowed us closer interaction with the professors, especially in the chemistry department,” Malone said. “We were able to use lab equipment much earlier than most and work on research to support the professors, which I believe helped me develop strong problem solving skills.”

His senior year, he served as ROTC battalion commander, which, he says, helped him develop even more skills.

“In ROTC, we spent hours studying and practicing leadership, as well as challenging ourselves mentally and physically on orienteering courses, rappelling and exercising.”

Although a great memory that stands out was jump (Airborne) school after his junior year, a chemistry memory hasn’t faded much, either (for him or the professors, I’d bet).

“I was a little mischievous,” Malone said. “During my senior year, my best friend and I made a particular chemical in the lab that exploded upon contact, more along the lines of pop caps, just a little stronger. We would put large amounts in filter paper and drop it down the stairwell from the third floor and run as the explosion echoed. We got in trouble when we put some under an eraser during one of Dr. (Jerry) Zweerink’s classes. When he grabbed the eraser it gave him quite a jolt.”

It must have all worked out, though. After graduating, he spent 11 years as active military, earning a Master’s in Chemical Engineering from Cornell University. He finished his military career as a Major teaching chemistry and organic chemistry at the United States Military Academy in West Point, New York.

Then he began working for GE Appliances and today is Vice President, Sourcing, responsible for a Global Sourcing Organization that purchases over $5 billion of goods and services that go into GE appliances that are made in the U.S., Mexico and Asia. The position requires world travel, which Malone enjoys.

He says his experiences in the Department of Chemistry and ROTC played a large role in shaping who he is today, so when he wanted to make a larger commitment to Missouri Western, he established the Shawn P. Malone Chemistry Scholarship, an endowed scholarship for chemistry majors, with a preference to ROTC cadets, National Guard and Reserve members and honorably discharged veterans.

“I have always been a regular supporter of Missouri Western because I recall the efforts they made to help me out financially,” he said. “I had reached a point in my career that it was time to start giving back more to those who helped me through life.”

He lives in Louisville, Kentucky with his wife of 31 years, Cathy, and has two sons who are both married, and one granddaughter.