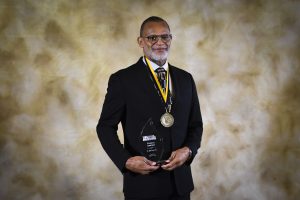 “I enjoy helping people,” the Farmington, Missouri native said. “My patients won’t get out without knowing how to become more active and exercise.”

Dr. Evans, who played football four years and served as team captain, says the courses he took at Missouri Western in exercise physiology and human performance led him to pursue a career in physical therapy. He earned a Bachelor of Health Science-Physical Therapy from University of Missouri-Columbia, a Master in Exercise Physiology from Georgia State University, a Doctor of Physical Therapy from Alabama State University, and a doctorate in medicine from Xavier University School of Medicine.

He was also vice president of the Student Government Association and served on the College Center Board. Dr. Evans believes his experiences as a student taught him discipline and great leadership and decision-making skills.

Dr. Evans was inducted in Missouri Western’s Athletics Hall of Fame as an individual in 2003 and as part of the 1975 football team in 2005.

“I really appreciate the strong base I received from Missouri Western.” 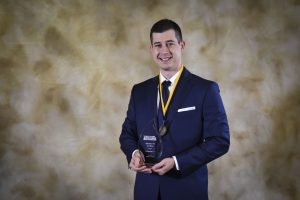 Company, in Pennsylvania, where he makes regulatory decisions for antibody-based and gene therapy drugs.

To date, his work has led to clinical trial approval in 16-plus countries with thousands of patients.

Dr. Dow, a native of Kansas City, Kansas, graduated from Missouri Western with a biotechnology degree, which combines biology, chemistry and business. He said as a student, his classes and two internships helped him get accepted into the University of Central Florida’s Biomedical Sciences Ph.D. program. He was hired at Janssen before he graduated.

“The professors and their classes shaped my interests in graduate school and provided me with a strong scientific foundation. Every day I use the scientific knowledge that I learned at MWSU.”

Drew Brown, U.S. Army Lt. Col., Retired
Herb ’35 and Peggy Iffert Award for Outstanding Service to the University
Drew Brown has been very involved in Missouri Western, including serving 12 years on the MWSU Foundation Board of Directors and helping with events in the Center for Multicultural Education. He is currently serving as the chair of the Arts Society Council.

His involvement in the community includes a list too long to name. “The community won’t improve if 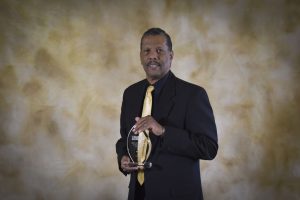 people don’t put their shoulder to the wheel and get involved. I’m trying to be the best community member I can be.”

Brown, a native of Philadelphia, earned bachelor’s degrees in biology and German at North Carolina Central University in Durham. He was drafted into the U.S. Army in 1966 and served until 1992, retiring as a Lieutenant Colonel.

While in the service, he graduated from the U.S. Army Command and General Staff College with the equivalent of a master’s degree. He is the owner of Brown Investments. 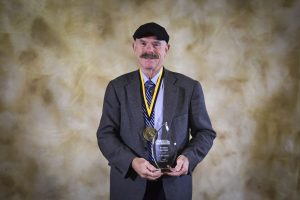 Dr. Bill Church ’89
Distinguished Faculty Award
Dr. Bill Church joined the Missouri Western faculty in 1990, when he was hired to work full-time in the Center for Academic Support and teach two English classes. In 1996, he began teaching full time.

“I love being around the energy of young people,” he says. “It’s meaningful when students really begin to see the power of language; when they find out the written word has power.”

Dr. Church is currently writing an autoethnography, “This is What it Means to Say Missouri Western,” that reflects his views as an alumnus and a professor with student anecdotes interwoven in the University history.

“Missouri Western transforms lives, and in my case, it is absolutely true.” 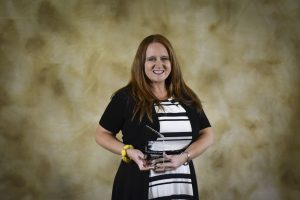 Kristi Bailey is the Director of Communications and Marketing for the St. Joseph Chamber of Commerce, a position she has held since 2008. Recently, she guided St. Joseph’s branding campaign, “Made with Uncommon Character.”

Bailey, from Ewing, Missouri, graduated with an English degree and a business minor. Prior to joining the Chamber staff, she worked eight years at the St. Joseph News-Press, where she was an award-winning reporter and assistant city editor.

“My time at Missouri Western wouldn’t have been the same without my sorority,” she said. “Not only was it responsible for forming the strongest friendships of my life, but it made me the leader I am today.” 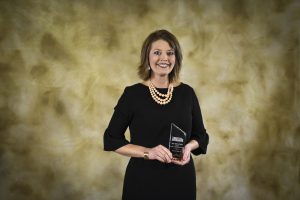 “My time at MWSU was amazing,” Dr. Pepper said. “I enjoyed the nursing program. The rigor and dedication the faculty provided set up all the new nurses very well for our careers.” 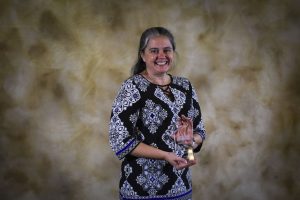 Great Griffon Award
Craig School of Business & Technology
Jaime Habersat is a Transportation Operation Specialist, Loss Prevention Team for the General Services Administration in Kansas City, Missouri. She has worked for GSA since 2009, and in her current position, she monitors for fraud, waste and abuse of government vehicles.

Habersat is also a volunteer Membership/Mobilization Manager for Team Rubicon, a veteran- and first responder-based disaster response organization. She has been volunteering for them since 2014 and has been on 10 deployments with them. She also teaches training classes for team members.

As a student, Habersat was involved in several organizations, including being one of the founding members of the Alpha Gamma Delta Fraternity. “I jumped in with both feet at Missouri Western,” she says. “There are so many memories, it’s hard to pick the most memorable.”

Habersat graduated with a Bachelor of Science in Business Administration and earned an MBA from Webster University in 2004. 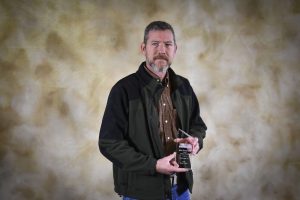 Patrick Larsen ’15
Great Griffon Award
School of Fine Arts
Patrick Larsen, from Weston, Missouri, graduated with a Bachelor of Fine Arts in Studio Art. As a student, he and David Harris, associate professor of art, built a wood-fired kiln and Larsen rebuilt the department’s salt kiln.

He had been a sculptor for 20 years when he decided to “put a degree behind it.” After he graduated, he opened a working studio, the Mad Potter Studio, in Weston.

As a student, Larsen set up a pottery wheel at the MWSU Foundation’s Donor Appreciation Reception for three years, visiting with those in attendance and displaying his craft.

Alexis Williams ’18
Student Leadership Award
Clifford Hughes ’55 Award
Alexis Williams graduated with a Bachelor of Science in Psychology in May 2018. 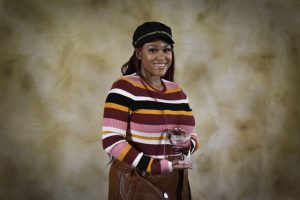 Willliams was involved in several organizations on campus, including the Student Government Association, National Association for the Advancement of Colored People (president), Alpha Kappa Psi, Alpha Kappa Alpha and Residential Life. She was also a member of the University’s Diversity and Inclusion Task Force and worked in the Center for Multicultural Education. In 2017, Williams received the University’s Drum Major for Justice Award.

“My jobs I held and the organizations I was involved in helped me grow into a professional,” she said. “The experiences gave me life lessons and helped mold me into the person I have become.” 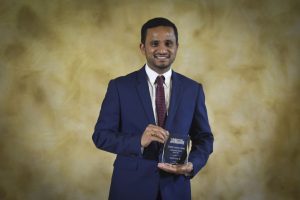 Sanhith Chinta ’18
Student Leadership Award
International Student of the Year
Sanhith “Sunny” Chinta graduated with a master’s degree in Information Technology Assurance Administration this past spring. He grew up in Nizamabad, India and earned a bachelor’s degree from St. Mary’s College of Engineering and Technology at Hyderabad, Telangana, India before enrolling at Missouri Western.

Chinta was involved on campus as part of the International Student Council and the Indian Nepali Student Association, where he says he gained leadership skills.

“My experience at Missouri Western was amazing,” Chinta said. “I felt like it was a second home.” 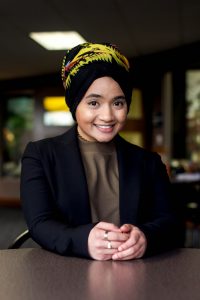 As a student, Hidzir was the program assistant in the Center for Multicultural Education, president of the International Student Council, a member of the Alpha Chi Honor Society and an editor for the Griffon Yearbook. She was selected as the student to give the commencement address at the May ceremony.

“I got to meet people from all around the world, organize events, utilize my skills and creativity in my classes and make so many memories,” she said.