Although his interest in China was piqued as a 15-year-old watching the 2008 Beijing Summer Olympics, student Robert Evilla never thought that interest would lead to a teaching position there. 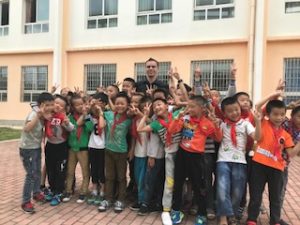 But even though he hasn’t graduated yet, Evilla spent most of his spring 2018 semester and summer teaching English at the Guizhou Forerunner College, a two-year college in the Guizhou Province in China. And before he left to come back and finish earning his degree at Missouri Western, he was hired to teach there for two more years once he graduates.

Although the Olympics inspired him to start studying Chinese history and culture, that might have been the extent of it until he registered late for classes in 2014 and realized that his only foreign language option was Elementary Chinese.

“I figured it was a sign I was ready to learn Chinese, but long story short, I hated every second of it,” he said with a laugh.

But Evilla said that Lian Jianhua, who was teaching at Missouri Western as part of the 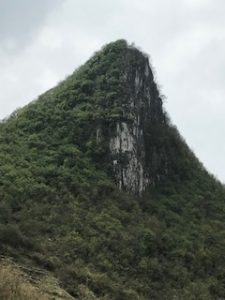 University’s exchange program with Xidian University in China, “refused to give up” on him. “I ended up passing and spent the summer going over what I had learned.”

Then he signed up for another semester of Chinese and had a much better experience.

In the summer of 2016, he studied abroad in Shanghai, and then he knew he wanted to return to China someday to teach English.

That opportunity arose in 2017, when Tammy Norris, Missouri Western’s study abroad coordinator, discovered that there was a high demand for English teachers in China. She knew Evilla from the Shanghai trip and gave his name to Guizhou Forerunner College, one of the universities in Missouri Western’s exchange program, and he was hired.

Evilla taught beginner English and English Special Interest (music), which adds a cultural component of the language for the students. He taught students American songs from different eras, and then put the songs in historical context. The college also held an English Learning Festival.

At GFC, Evilla said, the instructors also teach off-campus, visiting families of the villages, orphanages and low-income neighborhoods to teach English and provide charity work. Evilla said seeing the widespread poverty and how it impacts families was probably his biggest shock when he arrived in Ghizou. 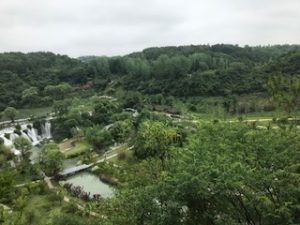 “It is hard to witness the hardships the people go through,” he said. “It is hard to see my students struggle even though they are trying with everything inside them.

“Through all of this it is remembering why I came here that makes it better. I studied language and it changed my life. I have overcome barriers that I wouldn’t have been able to cross without my former professors. Today I am the language instructor and it is my time to give back. I am here to be to my students what my teachers/professors have been for me over the years.”

Evilla said the school also sent him to some cities and towns to learn about Chinese history and culture, including Qing Yan, which has several shops of local artists and craftsmen, and re-enactors.

As a Missouri Western student, Evilla changed his major several times before deciding on sociology with an international studies minor. He didn’t consider a teaching career until 2015, when he became an English 100 workshop leader in the Department of English and Modern Languages.

“I absolutely loved working with the students, watching them become better writers and being someone who could be there to say, ‘I have been where you are, and it will be okay,’” Evilla said. “What really sold me was the spring publication ceremony and seeing one of my students who struggled a lot at first being honored.”

“Nothing feels more rewarding than hearing someone say ‘I always struggled with this until you showed me,’ ‘you’ve inspired me to not give up,’ or just hearing ‘you made a difference today.’”