Everything fell into place one morning when Jake Proffit ’17 walked out the front door of his home. In the weeks prior to that, he had been pondering and drawing up plans for a new sculpture for Potter Hall. When he walked out his front door and saw a cocoon that morning, he knew what he wanted to do.

That was how Kacoon came into being, and the nine-foot-tall stainless steel and concrete sculpture now 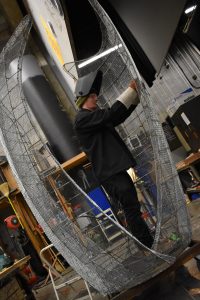 Proffit, a Savannah, Missouri native, graduated in December 2017 with a Bachelor of Fine Arts in Studio with a sculpture emphasis. Last fall, when he was enrolled in his last sculpture class with Eric Fuson ’88, artist-in-residence, Fuson asked if he would be interested in creating a sculpture to replace the one that was currently on the west lawn of Potter Hall. That sculpture, also created by a student, had been in place since the early 2000s, and it was showing signs of age, Proffit said. He readily agreed to create a new piece and got right to work planning what the sculpture might be.

Then he walked out of his front door and saw the cocoon. “I wanted to do something the students could relate to,” Proffit said. “Incorporating the idea of a cocoon and transition, the sculpture represents the journey of students throughout their college experience.” 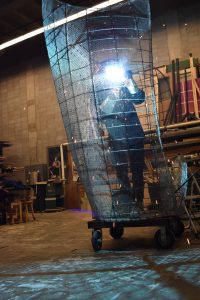 and experiences that shape them into well-rounded individuals as they “transition” into the adult world when they graduate.

The sculpture is made with a pin-rod frame and expanded metal mesh, covered with two layers of concrete. The interior space contains a stainless steel half-dome. Proffit says the entire sculpture is maintenance-free and should last for many years.

Kacoon is just the latest of several great sculpting opportunities he said he has had. Proffit worked on “We Came in Peace …,” the sculpture in the Walter Cronkite Memorial.

“I loved that. Without that, I would not have been able to work on this one by myself.” He said both sculptures contain the same interior framework.

And, in 2015, he and student Heather Lafromboise, Dustin Lafromboise and former assistant professor of art Neil Lawley won a public vote to be one of four pieces installed as part of the Canoe Art Imagine Art installation in Ann Arbor, Michigan.

“I’ve had a lot of big opportunities,” Proffit said. “I don’t know that I would have gotten those anywhere else. My portfolio is pretty awesome.”

Proffit hopes to continue sculpting and is currently exploring his options; one certainty is that will always work with his hands.

But for now, he appreciates that his work is on display in front of the building that houses the School of Fine Arts on the campus of his alma mater.

“It is definitely a good feeling that I am leaving something behind after all the opportunities I’ve been given here.”