A partnership between a local animal health company and Missouri Western has brought an international researcher to campus.

At the invitation of Bob Norton ’73, CEO and chair of the board of BioZyme Inc. in St. Joseph, Dr. 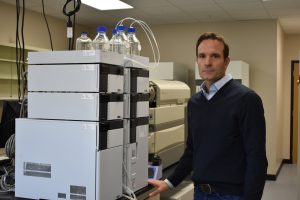 Ignacio Ipharraguerre became a BioZyme Scholar in Residence at Missouri Western this past fall. He is conducting research, primarily for BioZyme, in the University’s business incubator, Innovation Stockyard.

Dr. Ipharraguerre, who earned his master’s and doctorate from the University of Illinois Department of Animal Sciences, is a research associate at the Institute of Human Nutrition and Food Science at the University of Kiel in Kiel, Germany. He was conducting collaborative research for BioZyme at Kiel when Norton asked him to bring his work to St. Joseph.

Norton met with Dr. Robert Vartabedian, Missouri Western’s president, and Ronan Molloy, president of Innovation Stockyard, to arrange for Dr. Ipharraguerre to utilize the lab equipment in the Innovation Stockyard to conduct his research. He and his wife and three children moved to St. Joseph in July 2017.
“Our goal is not only to bring world-class scientists to our company, but to bring their families to the community, and Ignacio is a world-class scientist,” Norton said.

“Places like the incubator are right at the interface between academics and business,” Dr. Ipharraguerre said. “They make research projects affordable.”

The research involves aspergillus oryzae, a fungal organism that has been used in Asia since ancient times in food production. The fermentation process of the fungus and the extracts it produces, Dr. Ipharraguerre said, generates compounds that are beneficial for intestinal health.

BioZyme, which develops and manufactures natural, proprietary products focused on animal nutrition, health and microbiology, has primarily focused on products for digestive health for ruminants – animals with four stomach compartments, such as cattle. Dr. Ipharraguerre’s research has determined the fermentation extracts can produce gut health products for non-ruminants (monogastrics), such as poultry and swine.

By this fall, Dr. Ipharraguerre plans to begin training Missouri Western students on the lab equipment he is using for his research. He will also guest lecture in classrooms and collaborate with science faculty members.

“We felt like this was a good opportunity to give students valuable experience in an applied real-life environment,” Norton said. “Local animal health companies desire local graduates with good academic and applied credentials.” He noted that BioZyme has hired several Missouri Western graduates in the past.

“We’re lucky to have the University and Innovation Stockyard,” Dr. Ipharraguerre said. “Everything was a perfect match.”

“We are extremely appreciative to have Dr. Vartabedian’s, Dr. (Jeanne) Daffron’s and the entire Missouri Western staff’s support and collaboration on projects for our community like this one,” Norton said.