It’s not uncommon for students and faculty to work on research projects together, but the recent work of three faculty members this past year – Dr. Corey White, Dr. Julie Jedlicka and Dr. Michael Grantham – truly stand out.

Dr. White, assistant professor of psychology, received a $566,000 CAREER grant from the National Science Foundation (NSF) last year and began working with students in the fall of 2017. Dr. Jedlicka, assistant professor of biology, was awarded a $249,424 NSF grant with faculty colleagues at Humboldt State University in California, and a Missouri Western student was one of a team that conducted research in Kenya. And, a published article about Assistant Professor of Biology Dr. Michael Grantham’s research on spreading the influenza virus gained nationwide attention during the flu epidemic this past winter.

Brains: Dr. Corey White
Dr. White’s project, “Validating and Applying a New Class of Drift-diffusion Models for Investigating Individual Differences in Executive Control,” will develop and test new mathematical models of executive function, which allows us to control our thoughts, impulses, etc. He wants to provide new analytical tools for investigating individual differences in cognitive function to improve our understanding of how and why certain individuals have impaired ability to control their thoughts and 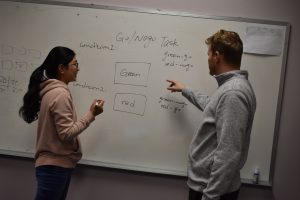 The five-year grant will fund scholarships for students each year and also provide funding for laptops and travel to professional conferences to report on their research. This past fall, he hired four students – Lauryn Muir, Kyle Kammerer, Bingxin Song and Alexis Guyton – and the group attended a Psychonomics Society Annual Meeting in Vancouver, British Columbia. Taylor Robinson joined the group in the spring semester.

Song spent the 2014-15 year at Missouri Western as an exchange student from Jiaxing University. After she earned her mathematics degree at Jiaxing, she decided to return to the United States to pursue a psychology degree from Missouri Western.

“I had never done research,” she said, “and I knew it would be a very good opportunity.” 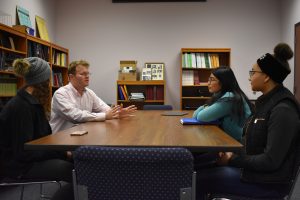 Song said her mathematics degree has helped a lot, and she is also appreciative that she is learning computer coding and getting to design some experiments as part of the research. She plans to attend graduate school and knows this research experience will make her more competitive when she applies for it.

Muir, a sophomore from St. Joseph, noted that Dr. White was working with graduate students on research at Syracuse, so she is grateful for the opportunity as an undergraduate.

“I am so happy to be part of the team and possibly contribute to the field of psychology,” she said.

Like Song, Muir believes this experience will place her ahead of her colleagues in graduate school. “It will also help me better understand when I am reading about other research projects.”

Birds: Dr. Julie Jedlicka
Dr. Jedlicka’s NSF research also began this past fall. Her project, “Birds, Beans and Bugs: Modeling a Warming Climate’s Effect on the Natural Enemies Hypothesis,” studies the roles of birds, insects and climate change in the ecology of coffee production in Kenya. The grant allows the professors and students from Humboldt and Missouri Western to travel to Kenya for five weeks each year for the next three years. 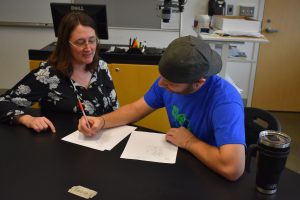 Justin Ross, a Bachelor of General Studies major from St. Joseph, conducted research in Kenya for the first year this past December and January, and Dr. Jedlicka will be part of the team in Kenya in 2018 and 2019.

She said one purpose of the grant is to give as many students as possible an opportunity for international research, so different students from Missouri Western and Humboldt will go each year.

“Students will benefit from collaboration with U.S. and foreign mentors while being fully immersed in the research process, from field work to analysis to writing for publication and presentation,” she said.

The goal of the research is to investigate what birds are eating on coffee farms, to see if they are eating pests that harm the plants. Dr. Jedlicka said they will gather data from both coffee farms in the sun and those in the shade, and they will study birds near coffee farms at a variety of elevations.

Ross found out about the opportunity when he was a student in Dr. Jedlicka’s ornithology class last year. His role in year one was to observe the foraging of birds on the coffee farms. The team of five students recorded information about the variety of birds they observed, and by the end of the five weeks, they had recorded information on 353 different bird species. 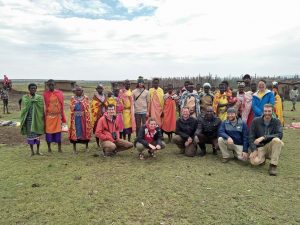 In year two and three, the researchers will select four to eight sites and set up mist nets to collect birds and bird droppings. Data will be recorded about the birds and they will be released, and the droppings will be shipped back to Missouri Western. Several students will extract the DNA from the droppings to determine the birds’ diets.

“The DNA analysis of the fecal matter allows us to know much more precisely what kind of bugs the birds are eating, and in this case whether they are eating insects that are pests to the coffee farmers.”

Ross said he enjoyed everything about his experience – the research, his colleagues from Humboldt, the culture, the Kenyans and the food. “It was a once-in-a-lifetime experience.” 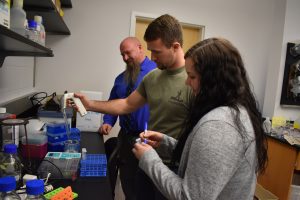 Dr. Grantham, who joined Missouri Western as an assistant professor of biology in fall 2016, worked with Dr. Don Milton of the University of Maryland School of Health on researching the spread of the influenza virus during the 2012-13 flu season. Their research results, “Infectious Virus in Exhaled Breath of Symptomatic Seasonal Influenza Cases from a College Community,” were published in January 2018 in the Proceedings of the National Academy of Sciences of the United States of America.

The publication caught the eye of the national media (including Time Magazine) since the article came out in the midst of the 2017-18 flu epidemic. The group studied how the flu virus spread through exhaled breath. Interestingly, their results seemed to indicate that the flu virus could be spread by an infected person merely breathing and that coughing was not required.

“We were able to measure the amount of infectious virus in exhaled breath, and I don’t think that had been done before,” Dr. Grantham said.

He noted that most people believe the flu virus is spread by either coughing or by direct contact, such as a handshake, but the research seems to show that it may just spread by exhaling.

“If we find that this transmission is the most important,” he said, “we have to rethink how we prevent and control the flu.”

Last summer, Dr. Grantham worked with four Missouri Western students on research related to the flu virus, and is continuing his research with one of the students, Savannah Lewis, a biology health science major.

The research involves a complicated process of cloning viruses that have been grown in a tissue culture, and working to create a new lab strain in order to compare it to older strains that are being used in most research.

Since she plans to continue in medical school after she graduates, Lewis, from Gilman City, Missouri, said she appreciates the experience she is gaining through the research.

“Students gain practical experience in a lab,” Dr. Grantham said. “They learn critical thinking and troubleshooting, and those skills are extremely important no matter where they go.”