Most people can relate to having boxes and boxes of photographs and knowing that the task of labeling and organizing can be daunting. But when the Pony Express Museum in St. Joseph wanted help organizing thousands of slides, Dr. Kaye Adkin’s technical documentation class stepped in.

Dr. Adkins, professor of English, said she likes to have a real client for this course, and a prior class had helped with manuals at a museum in Colorado. Dr. Adkins reached out to Cindy Daffron, director of the Pony Express Museum, to see if they needed any help with manual writing, but Daffron suggested the slide organizing project instead. Technical documentation involves information design and helping people find what they are looking for, so the project fit the class, Dr. Adkins said. 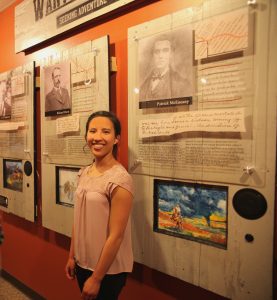 The slides were from a 1960s trip along the Pony Express route made by Don Reynolds, who worked for the St. Joseph Museum from 1955 to 1983.

One team created a filing system to identify the slides by the carousel and slot where they resided (“I had tons of slide carousels all over my office”), one team scanned the slides, and one team researched scanners and photo editing software for the project so the museum could complete the project after the semester ended. That team also wrote up a report, kept records of student hours and wrote manuals about the project for museum volunteers.

“The idea was to get the system set up and started, so volunteers at the museum could continue the work,” Dr. Adkins said. She said her class scanned and catalogued about 450 of the slides during the semester.

Some of the students in the documentation class were also in a multimedia class, so they helped with a Pony Express rider exhibit at the museum at the same time. The museum had stories of four Pony Express riders, and Missouri Western students recorded the actors, edited the recordings and added sound effects. Those audios are part of an exhibit now.

“This turned out to be a great project,” Dr. Adkins said. “This is what we do – try to get students involved in projects for real clients.”