Missouri Western’s Study Away Office offers a variety of trips and exchange opportunities every year, and destinations in the past academic year included Panama, New York, England, Scotland, Norway, France, India, Ireland, China and Oregon. We recently spoke with professors and students who took advantage of the travel opportunities.

Ireland: Singing in the Emerald Isle 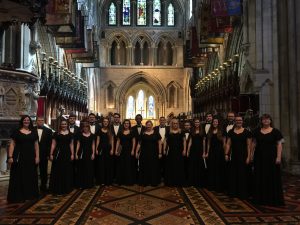 Dr. Elise Hepworth believes that choral programs should provide students an opportunity for an international experience, and the associate professor of music and director of choral studies  made it happen this past spring. She traveled with 23 Missouri Western students to Ireland, performing in

cathedrals and churches across the Emerald Isle.

“I want our students to say that they got everything they wanted out of the Missouri Western choral program,” Dr. Hepworth said. “It was an amazing trip.”

Along with performances in Dublin, Kilkenny and Killarney, the eight-day trip included tours of Kilkenny Castle, Trinity College, the Blarney Castle and Blarney Stone, the Rock of Cashel, House of Waterford Crystal, and a sheep farm. The second of the students’ two performances in Killarney helped raise money for The Alzheimer Society of Ireland.

Dr. Hepworth said two of her students got engaged to each other at St. Patrick’s Cathedral in Dublin, their first performance. The group told the engagement story at all their subsequent stops, and Waterford gave the couple a beautiful piece that was engraved with their names and the date of their 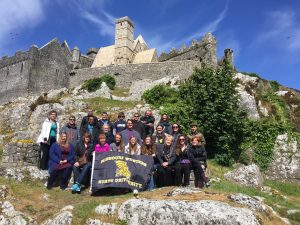 Lauren Thomson, a music education major from Faucett, Missouri, said she signed up for the trip as soon as she heard about it. “I never would have dreamed I’d get to go to that part of the world,” she said. “It was an opportunity I didn’t want to miss.”

Thomson said that tour guides at some of the historic sites who requested the group sing were brought to tears when the students performed the Irish Blessing. She said she loved sharing their music not only with audiences, but with fellow students.

“I loved watching the students experience all the history,” Dr. Hepworth said. “I wanted them to learn more about the world and foster their curiosity. I wanted to open their eyes to life outside the United States.”

Thomson thinks that was achieved. “It was an unforgettable experience and something I will always look back on. The trip took me out of my comfort zone, and it was great.” 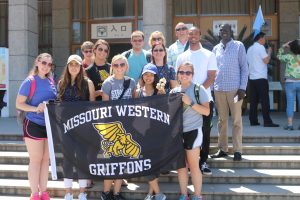 Because China’s economy is one of the largest and one of the fastest growing, Dr. Mike Lane said it was a pretty easy decision about where to travel for Missouri Western’s Global Viewpoint this past spring.

The dean of the Craig School of Business and his wife, Dr. Peggy Lane, co-taught the Global Viewpoint class and ended the semester traveling with 11 students on a 14-day trip to Shanghai, Xi’an and Beijing. The trip included visiting seven businesses and a host of historical sites such as the Great Wall, Yuan Gardens and Terra Cotta Warriors.

The Lanes had traveled to China two times in the past and knew it would be unique opportunity for the students. 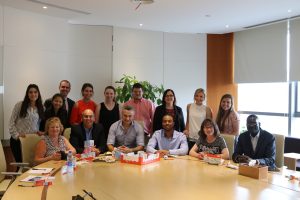 Courtney Kipping, who was on the trip, is majoring in both marketing and management with minors in entrepreneurship and international studies. She said she hopes to someday have a career in international nonprofit marketing, so Global Viewpoint was a great opportunity to travel and learn new things.

“It was interesting to see different aspects of business in China, especially how their marketing techniques differ from those in the United States,” she said. “One of the most fascinating parts was getting to see how rapidly China has grown economically.”

The business visits included meeting with company principals and usually a tour. They went to international businesses with locations all over the world, United States companies with a Chinese location, and one company that was founded in China. That company, Dr. Mike Lane said, generated the most discussion among the students.

Josh Ross ’17, who also traveled with the group, said he learned a lot at all the business visits, but he was fascinated meeting with principals and touring the CityOn Shopping Center. “Every time we went into a business, I was thinking, ‘This is great stuff.’”

Ross says he would love to own his own business someday, so the opportunity to visit such a fast-growing economy had him onboard for the China trip as soon as he found out about it.

The Craig School of Business plans a Global Viewpoint class and trip every two years. The program began in 1987 as New York Viewpoint and has included travel to Ecuador, Finland, Germany, New Zealand, Poland and others.

“It was a good learning experience,” Ross said. “I didn’t want to leave.”

“It really was a marvelous experience for the group,” Dr. Peggy Lane said. “Other classes talk about global business, but these students got to experience it.” 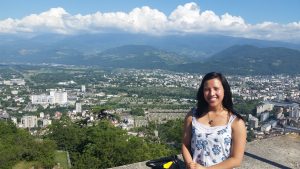 Cami Pendleton had such a great experience when she studied in France last year, she decided to make a video about Missouri Western’s Study Away Office as an assignment in her Multimedia Authoring class last spring.

“I could have made it about anything, but I’m so passionate about study away,” said the St. Joseph, Missouri native. “France was an incredible life-changing adventure.”

The English technical writing major with minors in general business, literature and French studied in Saint-Étienne, France for a month during the summer of 2016. She lived with a host family and took French classes at Jean Monnet University.

“Everything I learned in the classroom came to life over there,” Pendleton said.

She said she learned a tremendous amount about French culture, but also about other cultures by studying together and taking weekend trips with students in her class that were from around the world. In fact, a student from South Korea stayed with the same host family as she did. 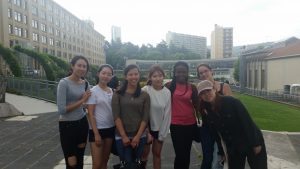 Although Pendleton says the food was incredible (“The French take their food seriously”), her most memorable takeaway was meeting new friends and learning about their cultures.

For her video, which now resides on Missouri Western’s Study Away page, she interviewed two other students who had studied overseas and Tammy (Glise) Norris ’79, who coordinates the University’s study away and exchange programs. She also asked professors to give advice for travelers in the language they teach on the video.

And her advice to fellow students who are considering foreign travel? Keep an open mind and take a lot of photos. “Don’t be ashamed of having a selfie stick,” she added with a laugh.

Pendleton says her French trip gave her the travel bug, and this past summer, she traveled to Norway and Italy to visit friends. “All I want to do now is travel.”