When Fumi Cheever, a native of Japan, was an undergraduate student at the University of Nevada-Reno, she didn’t have a lot of interaction with the Reno community. So when she was working on her master’s degree at Grand Valley State University in Allendale, Michigan, she sought out volunteer opportunities in the community, and even got international undergraduate students involved.
“I realized how important it was and how it benefits both ways,” she said of the community service.

For that reason, she was pleased to see that, when she arrived on campus last September, Missouri Western’s International Student Services Office had already developed a relationship with community members. Her first week on the job, members of Brookdale Presbyterian Church in St. Joseph hosted an ice cream social for international students and to welcome her to Missouri Western. 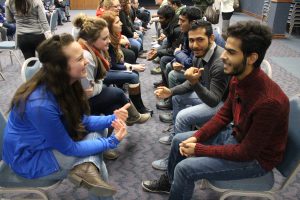 That community involvement is because of Christy Gregory, whose husband is pastor of Brookdale.

When they moved to St. Joseph last year, Gregory said she realized that community members wanted to be involved with the international students, and the International Student Services Office wanted the community to be involved, “but no one knew how to go about it.”

Gregory initiated conversations with the Missouri Western office and with her fellow church members, and the program took off from there.

Brookdale members hosted a breakfast for international student orientation at the beginning of both the fall and spring semesters, held a bonfire, invited students into their homes for Thanksgiving, decorated cookies for Christmas, celebrated Easter, and went ice skating and bowling. Additionally, many community members attended international student events on campus throughout the academic year.
Gregory noted that community members don’t have to be a member of Brookdale if they want to get involved. It’s as simple as getting on her email list and choosing the activities you want to be a part of.

“It’s the perfect thing for busy people. There’s no commitment and they can get involved only as much as they want,” she said.

Cheever said it has been wonderful for the international students. “International students are connected to campus, but it’s very important and valuable to them to learn about American family life and how Americans celebrate holidays. They (community members) offer experiences that a college campus can’t necessarily provide.”

“It starts with an event, but it branches into deeper relationships,” Gregory said. “Students really get to know people off campus.”

She noted that some in her group have even become English partners for the international students, helping them get a better grasp of the language.

“It helps overcome stereotypes and misconceptions,” Cheever said. “It’s been a very positive relationship with Brookdale.”

To get involved, email Christy at gregory_christy@hotmail.com.