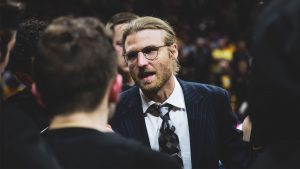 Will Martin was promoted to head men’s basketball coach after the resignation of Sundance Wicks.

Will Martin was promoted from assistant to head coach of the men’s basketball program. Martin served as the assistant coach the past two seasons and became the sixth head coach in program history.

“Will Martin has been a critical leader for the dramatic shift in culture, competitiveness and community support MWSU men’s basketball has experienced over the past two years,” said Josh Looney, vice president of intercollegiate athletics. “I am all-in on Will’s vision to continue our rise and I am all-in on the student-athletes he has brought into this program. The current momentum in our program is powerful and Will has all of the characteristics and experiences to lead us to our ultimate goals. Most importantly, Will will run a basketball program that St. Joseph will be proud to engage and support.”

“I am so humbled and grateful for the opportunity to lead this program,” Martin said. “My confidence does not come from me, but from this team and what we have accomplished together. I am fully aware that I would not be sitting in this position if not for the sacrifice of our players and the entire Griff community for the collective success of this team. I want to thank every mentor, coach and player that has been a part of my journey. I am blessed to have learned from the absolute best. Who I am and what I bring to Griff Nation is a credit to everyone who has invested in me along the way. With faith, love, ownership and work, I am excited to flow into this new era of Griffon basketball.”

Before coming to Missouri Western, Martin served as assistant men’s basketball coach and director of athletic admissions at Martin Methodist College (NAIA). Prior to that, Martin was the director of basketball operations at the University of San Francisco under head coach Rex Walters. Martin also gained Division I experience as a graduate assistant and video coordinator at Tulsa from 2013-15. There, Martin was a part of the Danny Manning-led 2014 Conference USA Champions staff and also worked under head coach Frank Haith.

As an undergraduate, Martin served as a men’s basketball manager at the University of Kentucky under head coach John Calipari. During Martin’s tenure with the Wildcats, the team reached the Elite 8 on three occasions, the Final Four on two occasions and Martin served as the head manager of the 2012 National Championship team.

In addition to his duties with the men’s basketball program, Martin served as captain of the University of Kentucky Ethics Debate team from 2009-2011. Under his direction, Kentucky claimed its first-ever Regional Championship and national appearance in the team’s history.

Off the hardwood, Martin also is involved in a prison ministry project – “Against the Grain” – where he serves as a volunteer teacher of the “180 Project.”

A 2007 graduate of Battle Ground Academy in Franklin, Tennessee, Martin and his fiancé Avens Ridgeway reside in St. Joseph.

Martin replaces Sundance Wicks, who accepted a position at the University of Wyoming after serving two seasons ast Missouri Western.

In two seasons, Wicks turned around the program. His first Griffon team doubled its win total from the previous season and his 2019-20 team improved by six wins over his first season to finish 18-14 overall, 13-6 in the MIAA with a fourth place finish in the conference standings and an MIAA Championship semifinal appearance. 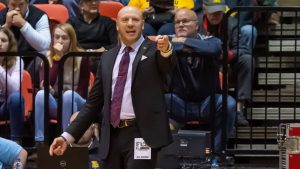 Wicks’ second season brought the most wins for the program in a decade; most MIAA wins in 18 years; highest MIAA finish in 10 years; longest home win streak (11) in 17 years; most home wins in 14 years; and a program-record 305 made 3-point field goals in a season. In his two years at MWSU, Wicks had six players named All-MIAA including the program’s first-ever MIAA Freshman of the Year and first, first team All-MIAA and NABC All-District selection in 14 years.