The #4 seeded men beat Washburn University on Friday, but lost to Northwest Missouri State on Saturday. They finish the season 18-14 overall and 13-6 in the conference.

The #6 seeded women lost to University of Nebraska-Kearney on Friday, finishing the season 21-8 overall and 13-6 in the conference. 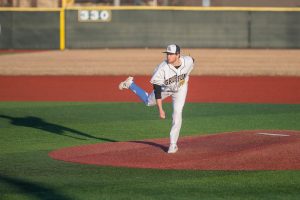 The Griffons brought out seven different pitchers to throw in Sunday’s game. Andrew Meier got the start for game three and only pitched a single inning allowing three runs to the Hillcats. Justin Wood, Jacob Cooper, Talbott Buford and Jake Gilbert were brought in for relief of Meier before Brock Wrolstad and Brian Tan finished out the game with the victory and save, respectively.

Men’s and Women’s Golf
Allycia Gan and Tammy Lim finished in the top-15 through two rounds of play at the Emerald Coast Classic yesterday in Destin, Florida. As a team, the Griffons finished in eighth place within the 13-team field. Missouri Western will round out action in Destin with the third and final round on Tuesday.

Next up is the Holiday Inn Express Women’s Invitational March 16 and 17 at the St. Joseph Country Club.

The men opened their season in the Warrior Invitation on Monday in Las Vegas. The Griffons finished fourth in the 12-team field with a score of 307. The Griffons will return to Stallion Mountain Golf Club today to compete in the final round. Individually, Lucas Horseman leads the field with a first-round score of 69.

The men play in the Hillcat Classic in Owasso, Oklahoma March 16 and 17.

Softball
The softball team pushed its win streak to five when it beat Drury University at the Spring Sports Complex on March 8. Missouri Western came back to defeat Drury (9-9) 5-4 in game one before a run-rule, 10-1, win in game two. After the pair of wins, the Griffons had won eight of their last nine games.

On March 6, they won both games of a doubleheader against Northwest Missouri State.

The Griffons play today (March 10) and tomorrow at home against the University of Illinois Springfield. Today’s games are 2 and 4 p.m., and Wednesday’s game is at 1 p.m.

Women’s Tennis
After losing to University of Missouri-St. Louis on March 6, Griffon tennis (6-5) bounced back with a 6-0 win at Illinois Springfield on March 7. Missouri Western took the doubles point without even completing No. 1 doubles then swept the top five singles matches, not needing to finish at No. 6.

The Griffons get a week off before returning to action March 14 at home against Southwest Minnesota State.

Track
Missouri Western track and field rounded out their weekend with the final day of the MIAA Championships on Sunday. Similar to Saturday’s action, many personal records were set and program records were broken.

Sunday’s results were highlighted by Hanna Williams placing third in the women’s 600-yard run. Williams’ finish is the best individual finish at the MIAA Indoor Championships in school history. She finished the weekend with a time of 1:24.59, scoring six points toward the women’s team total and breaking her program record for the third time this year.

Next up is the Texas Relays March 26 and 27 in Austin, Texas.