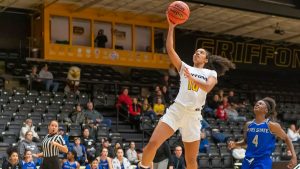 The Griffons led all 40 minutes and had four players score 10 or more points. Eleven Griffons played double-digit minutes and every one of them scored at least a point with eight scoring six or more. Missouri Western shot 54.2% from the field and scored 20 or more in each quarter while holding the Bobcats to 34.6% shooting and no quarters with more than 17 points.

The women jumped out to a 27-9 lead through the first 10 minutes of the game, shooting 65% in the first quarter. The Griffons are coached by first-year head coach Candi Whitaker.

Next up, the Griffons play at 5 p.m. Dec. 18 at the University of Illinois-Springfield. Over the semester break, the team will play Dec. 31, and Jan. 4 and 6 at home. On Jan. 9, they play at Washburn University in Topeka, Kansas and at Emporia State University in Emporia, Kansas on Jan. 11.

Men’s Basketball
The Griffon men currently hold a 4-6 record overall and 1-1 in conference play. They beat University of Central Missouri 67-63 on Dec. 5 and lost to Lincoln University 89-66 on Dec. 7.

Next up is a nonconference game at 7 p.m. Dec. 18 at the University of Illinois-Springfield. They will then play at 1 p.m. Dec. 21 at Rockhurst University in Kansas City. Three home games will follow on Dec. 31, Jan. 4 and Jan. 6 before they head out on the road again Jan. 9. 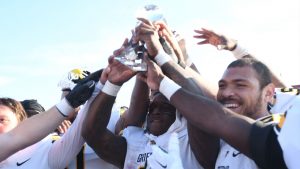 Griffon Football
The football team finished the 2019 season 9-3 by trouncing Henderson State (9-3) in the Agent Barry Live United Bowl on Dec. 7 in Texarkana, Arkansas. It was the 300th all-time win for Missouri Western football, and the nine wins were the first time since 2012. The Griffons also became the first team to ever win the Live United Bowl twice, as they won last year’s game.

Griffon Track & Field
Both the men’s and women’s track and field teams kicked off the 2019-20 season at the Mel Tjeerdsma Classic on Dec. 6 and 7 at Northwest Missouri State University.

Griffon track and event records were broken at the event.

Next up is the Graduate Classic Jan. 17 and 18 in Lincoln, Nebraska.