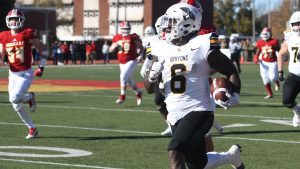 Football Thumps Pittsburg State
Griffon Football (7-2) picked up its first win over Pittsburg State (5-4) since 2012, 35-21, Saturday, Nov. 2 at Carnie Smith Stadium in Pittsburg, Kansas. An impressive defensive performance pushed the Griffons’ win streak to six games this season and gave MWSU its ninth straight win in an away stadium.

Pittsburg State scored 14 of its points and gained 212 of its 471 yards in the fourth quarter against mostly reserve defensive players for the Griffons. Missouri Western led 21-0 at the half to give the defense six straight shutout quarters. The Gorillas scored their first touchdown on their opening drive of the second half, but Missouri Western answered on its next drive. Anthony Vespo finished the Griffons’ fourth scoring drive after Wyatt Steigerwald exited with a shoulder injury. Vespo went on to lead another scoring drive, the second capped by his first career touchdown, a 5-yard run with 27 seconds left in the third quarter.

Missouri Western matched its win total from last year with two games to go. It’s the first seven-win regular season for the Griffons since 2014 (7-4). The Griffons play at home this Saturday, Nov. 9 against University of Nebraska-Kearney. It is Senior Day.

Men’s Basketball
Men’s basketball kicked off its season at the Small College Basketball National Hall of Fame Classic presented by Hillyard Inc. It was held at the St. Joseph Civic Arena. The Griffons lost their opener to Southern Nazarene University (Bethany, Oklahoma) and the second game to  Daemen College (Amherst, New York). 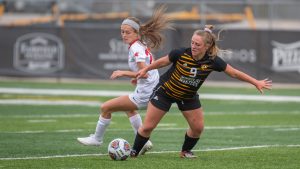 Missouri Western got goals from Taylor Schwartzkopf and MaKenzie Billings in the game. Schwartzkopf’s goal came in the 41st minute with assists from Billings and Kylie Mathis and made the score 2-1 UCM. After the Jennies took a 3-1 lead on Macy Ruffalo’s second goal of the game in the 56th, Billings again got MWSU within a goal off an assist from Claire Meyers in the 81st.

The Griffons out-shot UCM in the second period 10-9 after just two shots in the first half to the Jennies’ 17. Anna Mayer saved 11 shots. The sophomore ended the year with 122 saves, third most ever in a season by a Griffon. UCM managed 14 corner kicks in the game to just three by MWSU.

MWSU missed the postseason for the first time since 2013 and finished with its fewest wins and most losses since that 2013 season.

Down 24-21 in the fourth, the Griffons ended the set on a 7-3 run to win the set, the match and clinch a postseason berth. MWSU scored four straight to stay alive and take a 25-24 lead in the fourth. The Griffs scored the first two off blocks Danielle Moje and Ali Tauchen. Tauchen then had four straight kills and a Sam Duncan kill ended it.

Not only did the Griffons clinch their spot in the MIAA Championships, but they claimed sole possession of sixth place in the MIAA standings and moved a half game behind Central Oklahoma for fifth.

The team will play their fourth straight road game with a nonconference match with William Jewell College in Liberty, Missouri Nov. 5.

Women’s Basketball in Hillyard Classic
Women’s basketball lost an exhibition game at Iowa State University (Ames) on Oct. 30 and will play in the St. Joseph Civic Arena this coming weekend at the Hillyard Tip-Off Classic. Their first game is at 5:30 p.m. Friday, Nov. 8 against Concordia University-St. Paul.