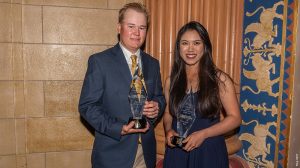 The pair of Griffon golfers claimed top honors among 13 total nominees for male and female student-athlete of the year.

The awards ceremony was held at the Missouri Theater in downtown St. Joseph.