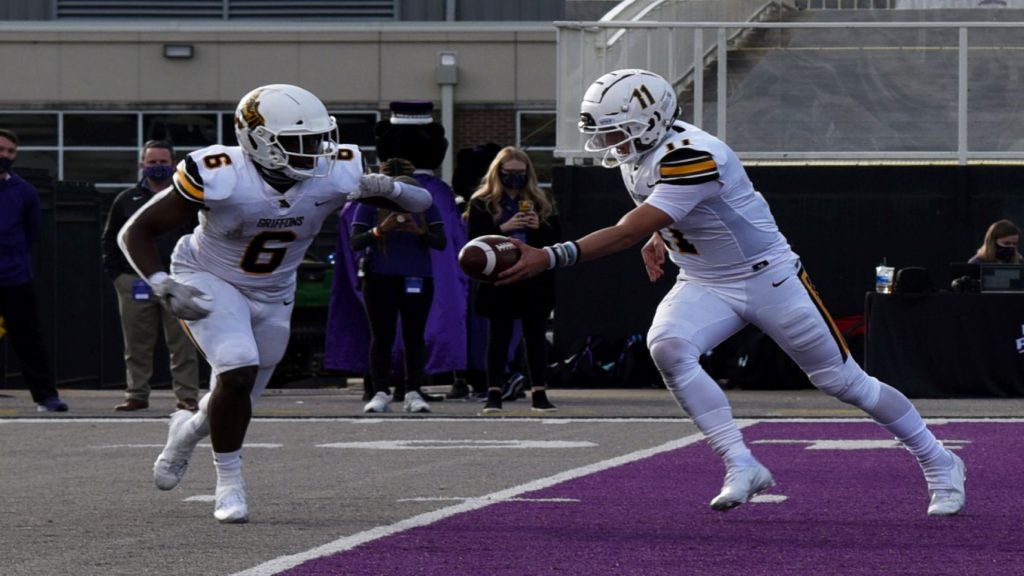 With COVID-19 canceling the NCAA fall sports seasons across the country, Missouri Western still found a way to return to the field in 2020. The Griffon football and cross country programs, utilizing strict COVID-19 testing procedures and protocols, were among the first NCAA Division II teams to compete despite the cancellation of their respective conference seasons.

The Griffon men’s and women’s cross country teams earned the distinction of becoming the first MWSU sports to compete since last March, when they returned to action on Oct. 16 at the Indian Hills Invitational in Centerville, Iowa. The women took the significant first one step further, by winning the team title at the event.

Griffon football made its return on Halloween at Division I FCS Central Arkansas. The matchup

– like all of 2020 – was unique and unprecedented, considering the Griffons entered their season opener against a nationally ranked UCA team that had already played seven games in 2020. The Griffons fell 52-10, but in a year that took so much away, just playing a football game in 2020 was a victory in itself. MWSU played just two games of its abbreviated four-game schedule due to COVID-19 protocols. The cancellation of games became more the norm than the exception across all levels of sports in 2020.

The Griffon soccer and volleyball programs did not compete in the fall, but are slated to return with abbreviated schedules in spring 2021. All fall sports student-athletes will be granted an extra year of eligibility in fall 2021.

Griffon football hit the road for their first game of the season on Oct. 31 against Division I Central Arkansas. Eager to hold a safe event for students, Student Government Association (SGA), Center for Student Involvement and Western Activities Council organized a watch party on the video scoreboard in Spratt Stadium. Students and alumni enjoyed free food and t-shirts, pumpkin carving, a costume contest and performances from the MWSU Drumline, Missouri Western Dance Company and Elite Cheer Team. Members of the Alumni Board handed out candy and Griffon swag to those in attendance.

Even though masks and social distancing were required, fun was had by all!