Launched at Missouri Western: True love and a cybersecurity career

Launched at Missouri Western: True love and a cybersecurity career 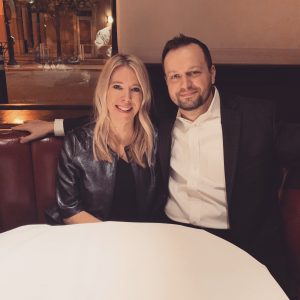 More than 20 years after graduation, Missouri Western continues to play a central role in Frank Luzsicza’s ’99 family life and global career as a cybersecurity executive and a digital entrepreneur. He and his wife, Amanda (Pedersen) Luzsicza ’12, are now giving back to the university where they met and began their careers. Frank is helping MWSU develop an undergraduate cybersecurity program while Amanda is planning to convene more than 100 alumni in the Dallas/Fort Worth area, where they live today.

Frank is an exceptional linguist –  he speaks six languages (not including programming languages!) –  thanks in part to his international background. Raised in Slovakia, he moved to Seneca, Kansas, as a foreign exchange student at the age of 15. After finishing high school in the United States, he entered Missouri Western to study math and computer science. Susan Hinrichs, Keith Brandt and other professors immediately recognized his talent, inviting him to take advanced courses as a freshman.

“Dr. Brandt challenged me in his advanced calculus courses,” Frank recalled. “It was the right approach to teaching, and I immediately felt that Missouri Western would treat me as an individual student with particular talents and interests rather than just one of 10,000 entries on a spreadsheet.”

The faculty offered Frank much more than academic help. Before his freshman year was over, he learned that his parents were getting divorced – half a world away.

“My professor, Kent Pickett, personally escorted me to the financial aid and housing offices,” he explained. In just a few days, with the professor’s help, Frank landed scholarships and a part-time janitorial job in the housing office so he could continue his studies uninterrupted.

He later learned about an internship with the IT helpdesk at Boehringer Ingelheim in St. Joseph. Seizing the opportunity, he expanded his hands-on computer skills. A year later, he landed a part-time internship with Ernst & Young’s security practice in Kansas City where he developed cybersecurity software.

At a New Year’s Eve party his senior year, Frank met then-freshman Amanda Pedersen. She made a big impression: he asked her out the next day, and they’ve been together ever since.

Frank continued to work for Ernst & Young until graduation when the firm hired him full time. His talents did not go unnoticed: IBM lured him away a few months later. “Thanks to the flexibility I learned at MWSU and my hands- on experience,” Frank said, “I could progress fast.” In less than three years, he was managing a consulting group as a principal at IBM.

The couple stayed in the St. Joseph area with their son, Chandler, while Amanda earned her degree in social work. In her last semester, IBM offered Frank an executive position in Poland. They made the move, and Amanda Skyped into classes – long before remote learning was routine – thanks to professors Pam Clary and Ali Kamali. She completed an internship working with ambassadors, and graduated on time – from Poland. “The Missouri Western mindset was that you can learn anywhere and accomplish anything,” Amanda said.

From Poland, the Luzsiczas moved to Singapore, where Frank ran IBM’s Asia Pacific cybersecurity unit and Amanda worked for a tech startup. They returned to Texas in 2016 when Frank took over IBM’s North America cybersecurity unit.

Back in the States, they both reconnected with Missouri Western. While the university has a graduate- level cybersecurity program, Frank started work with faculty on a bachelor’s program. Cyber threats are growing, he points out, and demand for talent in this field is growing much faster than supply. Missouri Western’s emphasis on applied learning would distinguish the program from those at other schools, he believes, and allow graduates to offer more skills to employers. “With practical experience built into the program, graduates will be prepared to fill analyst roles right out of college.”

And since a lot of cybersecurity work is now done remotely, the Luzsiczas hope that more top graduates will stay in the area after they complete their studies, benefitting the community and also the local economy.

The Luzsiczas now live near Dallas, where Frank serves as the chief executive of Lodestone, an IT security service provider. The couple says they run into a surprising number of MWSU alumni – they’re aware of at least 100 in the area. Before COVID-19 hit, Amanda had been planning to host alumni events, and the couple were looking forward to getting together with everyone in person. They’re still networking, but now planning a virtual event instead.

The connections run deep. The Luzsiczas are deeply grateful for everything Missouri Western has provided them – personally, academically and professionally. “The school has been incredibly flexible, helpful and supportive,” Frank said. Amanda believes her professors and fellow students prepared her well for life after graduation.

“We owe them more than we can say,” she added, “and we enjoy giving back to the school whenever possible.