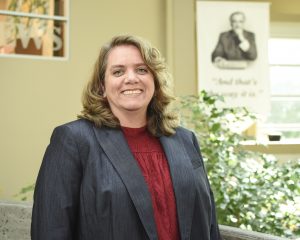 After spending the majority of her career with for-profit organizations, Chambers knew she wanted to experience something new, yet familiar. “I liked the idea of working for a nonprofit organization where the goal is focused on improving the quality of life … it’s more personal,” Chambers said.

Chambers’s goal for her first year in her new position is to understand the processes and history of activities of the Foundation. She wants to familiarize herself with the Foundation’s day-to-day operations and its interactions with the institution and community. “Regardless of whether an organization is a for-profit or a not-for-profit, the target is a favorable result at the end of the day’s operations,” Chambers said.

“I have had a number of successes in my career that have come through diligence and hard work, but I would not have had those opportunities without the degrees that I earned at Missouri Western opening those doors initially,” said Chambers. She graduated from Missouri Western in 1998 with degrees in marketing and accounting.

Chambers’s husband, Scott, is also a St. Joseph native. They have been married 15 years. She has a daughter, Ashley, age 24; and a son, Xavier, age 13. She also has two grandchildren, Brayden, age 4; and Raelynn, age 4 months. During her previous time in the community, she volunteered actively with the local Girl Scouts, St. Joseph Figure Skating Club and Junior Achievement.

Chambers began her duties in October 2020.