Forging Ahead at Missouri Western

Forging Ahead at Missouri Western 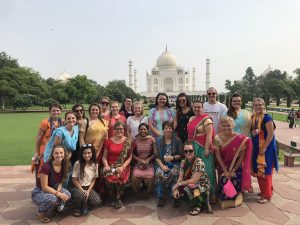 Students interested in studying abroad can learn about faculty-led courses offered through the Global Center. Two study abroad trips were held in May – Austria/Czech Republic and Japan. John Hewitt, director of global engagement, works with both faculty members and students on study abroad experiences.

ISS also offers a variety of activities for the campus community, including international cooking classes, an international fair and a celebration of international festivals throughout the year.
More information about the Global Center and its services can be found at missouriwestern.edu/global.

Biology creates Gold Fridays PORTAL
With the announcement of a Monday through Thursday class schedule for the fall of 2020, departments across campus are planning applied learning opportunities for students on the Gold Fridays.

When Gold Fridays was announced last fall, Missouri Western President Matt Wilson noted that Fridays could be used for internships, research, community service, meeting with professors, tutoring, study time or whatever the student chooses. It could mean one less day on the road for commuter students, as well as a benefit for athletes who often travel for competitions over the weekends.

The Department of Biology will launch Gold Fridays PORTAL as a pilot program for the 2020-21 academic year, according to Dr. Todd Eckdahl, professor of biology and chair of the department. All full-time faculty members will engage in collaborative research with students, and students will have the option of earning credit hours for the research opportunity.

“This will increase the number and quality of applied learning opportunities for undergraduate students,” Dr. Eckdahl said.

The department also plans to provide a number of other applied learning opportunities for students on Gold Fridays, such as internships through AHEC (Area Health Education Center), with Missouri Department of Conservation and other conservation agencies, area life science companies, and community service projects through the Center for Service. 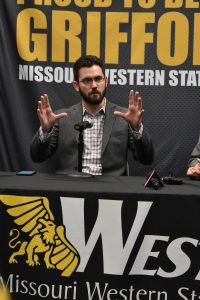 Esports update
Ever since the esports program was launched and Director Christian Konczal was introduced in December, interest about it from current and prospective students just keeps growing. A web page was launched that month that included a survey gauging student interest about the program and particular games. By March, there were more than 300 responses from both students and prospective students.

Matt Wilson, Missouri Western’s president, said he has seen a large amount of interest in the esports program from the high schools he has visited across Missouri. He said the program was started to help with recruiting new students and retaining the current students, and Konczal believes that will be the case.

He noted that he spends at least the first hour of every day responding to emails from students, prospective students and parents asking questions about the new program. Konczal also has several students who want to volunteer for a variety of duties once esports gets underway.
“I have been blown away by the student interest,” he said. “We have a super engaged, passionate cohort.”

Konczal said they recently launched a Discord Server, which brings Missouri Western students together who are interested in esports.
Plans are also moving forward for an esports arena to open in Blum Union this fall. The arena will be housed where the Barnes & Noble Bookstore currently resides, and the bookstore will move to the first floor of the Hearnes Center. The arena will contain both personal computers and consoles for games, a broadcast area and Konczal’s office.

The arena will be open to all students at no cost to them up to a yet-to-be-determined amount of hours, according to Konczal. He believes it will be a great place for students to hang out for recreation, engagement with each other, competing in intramurals or practice for esports team members. Konczal says he hopes to host tournaments there in the near future.

“It’s going to be an awesome space. I’m super excited,” Konczal said. “Through all this, inclusivity is our goal. “If students come in, it doesn’t matter what they play, they are going to have a home on campus.”