Editor’s note: In the fall of 2019, Missouri Western’s present-day campus and the four-year college celebrated its 50th anniversary. As part of the celebration, we look back at the Bushman Planetarium that was part of the campus right from the start. 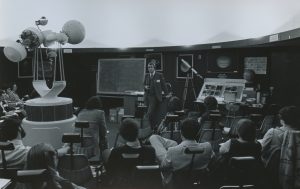 When Missouri Western was planning its new campus west of I-29 in 1967, Jerry Wilkerson, professor emeritus of mathematics, still recalls the day he walked into President M.O. Looney’s office and suggested Dr. Looney consider building a planetarium in the science and math building, one of the first buildings planned for the new campus. Wilkerson, who started teaching at the St. Joseph Junior College in 1964, thought it would not only be a good addition to the building, but a great resource for the community.

Dr. Looney told Wilkerson he would think about it, and told him later that he planned to include it in the new building on the southeast corner of the first floor. Wilkerson researched and purchased the equipment for the planetarium, and he has been involved in its operation ever since. Wilkerson began running shows as soon as it opened, and even though he retired from teaching in 2002, he continues to schedule and run the shows. He says he loves it when a parent comes in with their children and tells him they attended shows when they were in elementary school. 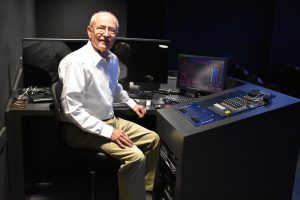 Wilkerson said the first show, one that “did a beautiful job” of showing the night sky and constellations, was held in October 1969. At the time, there were only a handful of planetariums in the state.

Over the years, more and more shows have been added to the planetarium lineup. “Stars of the Pharaohs,” “Extreme Planets,” “Mystery of the Christmas Star,” and “Nine Planets and Counting,” are four of the 16 current shows. (Wilkerson’s favorite? “Sea Monsters.”)

Before the total eclipse in August 2017, Wilkerson offered the show “Totality” several times in the weeks leading up to the eclipse, and every show but one was sold out.

In 1996, the Joseph R. Bushman estate donated more than 400 acres of farmland, which included three houses, to Missouri Western. When the property was sold, $250,000 from the proceeds of the sale was used to renovate and update the planetarium, and it was named the Bushman Planetarium at that time.

That renovation included new equipment and technology, and new seats and lighting. It reopened in September 1997.

At the time of the renovation, it was estimated more than 50,000 people, including many elementary school groups and Missouri Western astronomy students, had visited the 28-year-old planetarium.

When Agenstein Hall underwent a complete renovation in 2010, Wilkerson said there was never any talk about removing the planetarium; everyone wanted to renovate it, as well. The new planetarium, now an immersive theatre, opened in February 2011 and continues to be a popular draw on campus and in the community.

And Wilkerson is proud to have been a part of it for the entire 50 years.