When LaTonya Williams ’03 was a student, her email signature was LaTonya “I’ll sleep when I 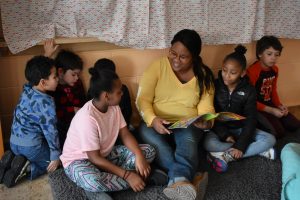 graduate” Williams. But even though several years have passed since she graduated, she still doesn’t seem to have gotten the “you can sleep now” memo.

Williams, who graduated with a journalism and public relations degree, is a professional photographer, the executive director of youth and community outreach at St. Joseph’s Bartlett Center, and a mom of three.

As a photographer, she has her own studio and takes maternity, family, sports team, senior photos and more. She also photographs for Josephine, St. Joseph News-Press’s women’s magazine.

At the Bartlett Center, she works in the daycare and preschool as well as hosting parenting classes and computer classes. She had previously served as interim executive director there, and when they hired an executive director, the staff told her that they wanted her to keep working.

Williams, a native of St. Joseph, was a teen mom with an infant when she started at Missouri Western. “My mom encouraged me to attend college, but once I had my daughter I didn’t want to,” she said. “I told her it was hard, and all she said was ‘So?’ And I didn’t have an answer. So I went to class with my daughter in her car seat, and then on my hip when she was older.”

Even as a student with a child, she still found time to get involved in the Griffon News student newspaper, serving as editor-in-chief.

Williams recently received international attention for her photography project, Black Girl Magic, a themed photo shoot to counter the low self-esteem she was seeing among some of the young girls at the Bartlett Center. Every year, she chooses young black girls, works with a makeup artist and hair stylist and launches a themed photo shoot. Parents tell her what a difference the shoot has made in their daughters’ lives.

This past February, she was chosen to attend Project Obscura, a photography conference in Las Vegas. She was able to train with five of the best photographers in the industry while shooting models at El Dorado Dry Lake Bed.

“My favorite part of the conference was meeting these amazing photographers that I’ve only read about,” she said. “It was great to meet other like-minded professionals who truly understand what you’re going through. Plus, who doesn’t need more friends?”

So for now, it seems Williams will continue to forgo sleep so she can keep helping people, raise her family and keep taking photos.

At the Bartlett Center, she is currently working with a class for parents where they can ultimately earn an associate degree. “People like to come up with excuses. They say they can’t get childcare, but I have staff who will watch their kids,” she said. “Then they say it’s hard, and I say, ‘So? Everything worth achieving is hard.’”