Editor’s note: I had heard about Dr. Mark Mills’ campus turtle research and decided to tag along one day this past summer and check out his and his students’ work with Griffon turtles. 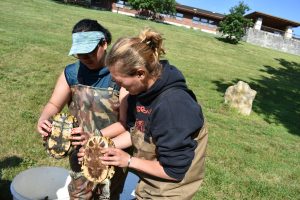 With nine ponds and a creek running through Missouri Western’s 723 acres, it should come as no surprise that students are sharing the campus with a large population of turtles. And it also should come as no surprise that Missouri Western biology students are studying those turtles.      Since the summer of 2009 when the first turtle research team was formed by Dr. Mark Mills, associate professor of biology, more than 30 students have cataloged over 200 different Griffon turtles. 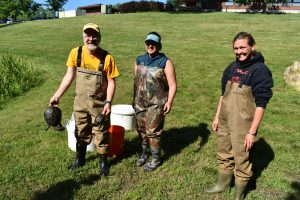 This past summer, Dr. Mills worked with two of those students, Faye Thammarat and Mistina Wheeler. They dropped nets in campus ponds three days a week throughout the summer semester in an effort to record turtle life at Missouri Western. Dr. Mills said that most turtle studies are in rural areas, but their study is distinctive because the University is in an urban area.

I caught up with the turtle team at 9 a.m. one morning in mid-June in the Department of Conservation building on campus. The three turtle researchers donned chest-high waders and boots, and away they went to Wild Pond, the one that is closest to the conservation building and the first of two ponds they were checking that day.

“It’s not for everybody,” Dr. Mills said of the turtle field research. “After a couple of snapping 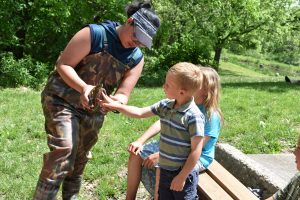 Dr. Mills, Faye and Mistina talked turtles to a homeschool group this past summer.

Before checking if they had caught any turtles, the student researchers recorded the time, the weather, the water temperature and clarity of the water. Then they checked their nets. The day before, they had netted seven, all turtles that had been previously captured. Today, the first pond yielded three, two painted turtles and one slider.

“A big part of this is to give students experience in hands-on field work,” said Dr. Mills, who teaches evolutionary ecology and vertebrate biology. “It’s more important what the students are doing than what they find.”

Thammarat, a senior zoology major from Thailand, said this was her first time working with Dr. Mills and turtles, and she said she was really enjoying it. She hopes to have a career in research, so she has previously conducted research with two other Missouri Western professors.

“I’m trying to find which animal I want to work with and it’s so hard to decide. I just know anything 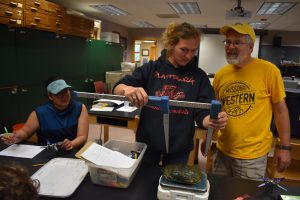 but insects,” she said with a laugh.

The turtles were transported in a bucket back to the lab in the Conservation building where they were measured and recorded. One recapture had eggs the last time she was captured recently, but now there were none. Another had not laid her eggs yet. Students also counted leeches that were on the turtles (forget the snapping turtles, the leeches would make me turn in my waders).

Two of the day’s turtles had never been captured, so their shells got notched (it doesn’t harm them) and they were assigned a letter and a number. Thammarat and Wheeler also tried to estimate the turtles’ ages by counting the ridges on its bottom shell (kind of like counting tree rings). One capture was an eastern slider, and Dr. Mills suspected it had once been someone’s pet since that species is not native to Missouri.

By summer’s end, turtles in all nine campus ponds were checked at least once. The researchers also set nets in a pooled area in Otoe Creek near Eddie’s Bridge. (“Turtles use Otoe Creek like a highway,” Dr. Mills said.)

In the 10 years of study, students have recorded information on over 500 turtles, including recaptures, and the three most common turtles captured on campus have been the snapping, painted and red-eared slider.

One turtle has been captured more than 30 times since 2009 (she’s grown a centimeter since then, by the way). Although she has always been found in Wild Pond, Dr. Mills said their study shows that some turtles do move between ponds. 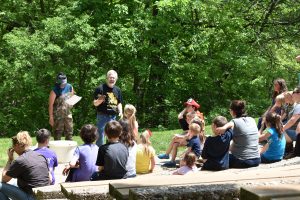 Dr. Mark Mills talks to a homeschool group this summer.

And to validate his point, the second pond they checked on the day I tagged along, Old Pond, netted two traveling turtles. This pond had been dry for the past three years and had just filled back up this past spring, and the turtles traveled about 600 feet to it from Wild Pond.

The longest distance of a documented turtle movement, Dr. Mills said, was a snapper that moved from South Pond by Vartabedian Hall to the Canoe Pond by the MWSU letters, approximately 2,900 feet if it traveled in a straight line. He estimates that more than 20 have moved between ponds at least once.

“I used to think turtles were slow and lazy, but they do move and some are feisty,” said Wheeler, a senior zoology major from Plattsburg, Missouri.

Thammarat and Wheeler presented their research results at a showcase on campus in September.

The wild campus
Missouri Western’s 723-acre campus contains nine manmade ponds. With the help of the Prairie Band Potawatomi Nation several years ago, the ponds were given names in the Nation’s native tongue with English translations. 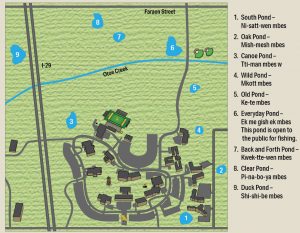