Carr interns at National Portrait Gallery
Student Alexis Carr always loved art and knew that’s what she wanted to major in, but she says she 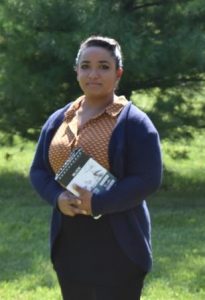 “found her calling” when she took her first art history class. And last summer, she found her dream internship when she was selected to work at the National Portrait Gallery in Washington, D.C.

The studio art major and art history minor was selected for a nine-week Katzenberger Foundation Art History Internship through the Smithsonian Institute, which only funds six projects a year. Her project was “Recovering a 19th-Century African American History, Biography, and Portraiture through a Collection of Slave Narratives.”

“It was incredible. I was so honored to be there,” she said. “You can just feel the history and significance of what you’re doing and where you are.”

Her research was part of a reconfiguring of the current 19th century gallery to make it more diverse. She studied William Still’s book, “Underground Railroad Records,” which documents the stories of more than 600 slaves who escaped via the Underground Railroad, and she researched to find more information about those in the book, which contains more than 100 photographs.

Carr, a native of St. Louis, also spent time taking inventory in one of the Gallery’s storage rooms, which was “really cool,” and conducting research in the Library of Congress.

“It was inspiring to see so many people passionate about art, history and culture. It made me want to be a part of it,” she said.

She was also inspired by reading the stories of the slaves and what they had made of their lives once they were free. “The stories were so heartbreaking. These people went through this and went on to do incredible things,” Carr said. “I thought, if they could put the pieces of their lives together after that, then there’s no excuse for me to not do something great. It really put a fire and drive in me.”

Carr, who plans to attend graduate school for art history, praised the Department of Art for its “culture of support,” and for giving her the experiences that led to her selection for the internship – conducting research with faculty members, starting an art history club and organizing an art history symposium at the Albrecht-Kemper Museum of Art.

In the fall 2019 semester, she helped catalog the print collection that was donated last year by Dr. William Eickhorst, professor emeritus of art, and his wife, Edith.

“My experience here is proof that there are a lot of opportunities at Missouri Western.” 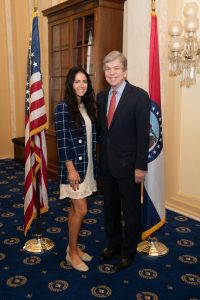 When Mazzie Boyd was serving as an intern for Sen. Roy Blunt in Washington, D.C. this past summer, a visitor asked her how she ended up in the nation’s capital even though she was from a small town in Missouri (Stewartsville).

“I had to think about it a minute, and then I realized it was because Missouri Western gave me the opportunity,” she said.

Boyd, a business management major who will graduate in May 2020 after just three years of college, attended the Governor’s Student Leadership Forum in Jefferson City, Missouri in February 2019, and was recommended for a summer internship in D.C. She spent nine weeks in Sen. Blunt’s office, answering calls from constituents, taking around office visitors and attending committee meetings.

“It was great seeing all the senators that you usually only see on television,” she said. “I also enjoyed serving Missouri; it was the best way I could give back to my state.”

While interning in D.C., she lived at the National Student Leadership Forum’s Cornerstone Intern House with 39 other college students from all over the world, which she said enhanced her already great experience.

Cornerstone residents conducted volunteer work, heard guest speakers and participated in discussions and activities together. Boyd says that experience was almost like a second internship, because she learned a lot about relationships and friendships.

“In some ways, I feel like I have a different perspective on life,” she said. “I learned that who you surround yourself with in life is important.”

In order to be able to graduate in just three years, Boyd took 12 credit hours of online courses this past summer, even though she was completing the internship for Sen. Blunt.

But full course loads each semester didn’t stop her from becoming involved in a number of student organizations, particularly the Student Government Association. She has also worked in the Student Affairs Office since she was a freshman.

And her advice for incoming freshmen as she gets closer to graduation? “Get involved. Getting involved and stepping out of my comfort zone has made my experience so amazing. And if you want good grades, you have to put in the effort and work.”