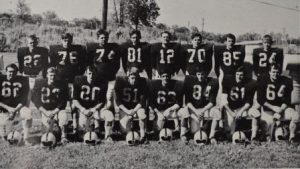 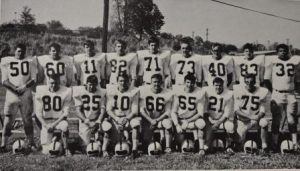 On Sept. 12, 1970, the brand new Griffon football team took to the field for the first time, playing Morningside College in Sioux City, Iowa under Head Coach Harold Cagle. The Griffons were defeated 72-10, and that score holds the record for the largest margin of defeat to this day.

Although it was a crushing blow, the score couldn’t dampen the fact that it was the first of a season 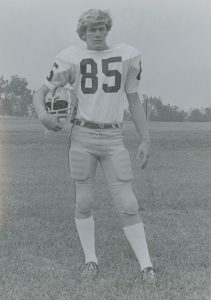 of firsts, as a new era had begun at Missouri Western. This past fall, that program celebrated its 50th season on the gridiron, and Athletics celebrated big.

“It’s very rare in life that anyone or any group of people have the opportunity to do anything for the first time – the first game, the first bus ride, the first team game meal, the first touchdown or tackle of a game, the first block or interception, the first home game and the first ride in the city bus down to Noyes Field to experience that first home game. Those special times were spent with total strangers who would eventually become your best friends for life,” said Zack Workman ’74, co-captain of the first football team and 50th Season committee member. “To share those experiences for four years with so many others has been an honor not only for me, but for everyone who played a part in the program 50 years ago.”

In the fall of 2018, former player Scott Graham ’78 approached Dr. Josh Looney, Vice President for Intercollegiate Athletics, to talk about the upcoming milestone season. Graham agreed to form a committee to determine how to celebrate the milestone.

“I wanted it to be an all-season celebration instead of just one game. It’s a very big deal,” Graham 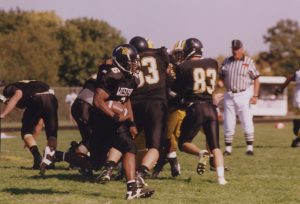 said. “We practiced on a field that was located where we tailgate today. The hill we ran for conditioning is where the stadium seats are today. Our group laid the foundation that others built on, and that foundation continued to be built on to where we are today.”

The committee immediately knew they wanted to honor former football Griffons, and five scheduled home games made it easy – one team for each decade was honored at each game. Five  different committees made up of players, coaches and staff from that decade selected each All-Decade Team, and in all, 151 former players made up the All-Decade rosters. They were invited to attend a game, and a special commemorative program honoring each team was also part of the celebration. 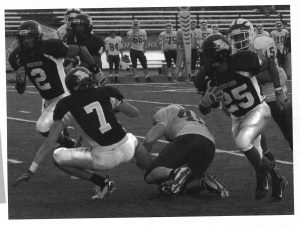 the growth of the Griffon football program,” Workman said.

Nick McCutcheon, director of Athletics Marketing and Communications, coordinated the production of the commemorative programs for each game, but he gave credit to Graham, who spent many hours researching 50 years of football records to help compile the All-Decade teams and create the programs. Graham researched every player on every team by scouring newspaper articles not only in local papers, but in other cities where the Griffons played. He provided the main list of players and their accomplishments to the committees in order to select the All-Decade teams. 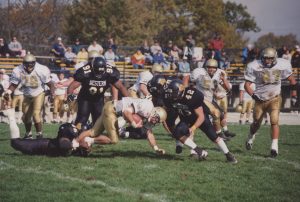 Some of the 50th season celebration events included an All-Decade Team tailgate, an opportunity for the former players to walk down the hill with the current players, recognition of the football alumni on the field and a tour of the current athletic facilities. For each home game, players had a Griffon decal from the designated decade on their helmets.

Some of the former players had not been back to visit the campus in several years, and some had not visited since they graduated. 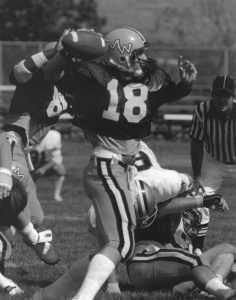 “Seeing the former players come back was like seeing relatives you had not seen for a time,” Workman said. “It was like you just walked off the practice field and said to each other, ‘I’ll see you after while.’ For some the ‘after while’ has been many, many years but it was like it was yesterday.”

Graham said he also wanted to make sure they honored the coaches of the past, so large photos of the three Hall of Fame coaches – Harold Cagle, Rob Hicklin and Jerry Partridge ’86 – are now hanging in the Stadium Club.

“Every athlete, regardless of their time spent or their success on and off the field, had their hands in the success of the program,” Workman said. “For many of us who had the privilege of being on the first team in 1970 and remember the first game, we understand that our time is limited and we understand that each year is a gift that should be shared with others because there are no guarantees for the next year. So it’s very special, and to share those moments with others you played alongside or other Griffon players who came later is certainly an honor for everyone involved.”

Besides the lopsided first-game score, that first season’s record was 1-8. But that , too, has long been overshadowed by many great moments and records over the next 49 seasons.

“What does it mean to look back and realize this was football’s 50th season? It means everything,”

Workman said. “It’s where my real life began. It means the lifelong friendships that others and I still enjoy today. I met my wife of 47 years when I was a football player and student at Missouri Western.

The coaching staff and head coaches each are a part of this story because they too are a part of the Griffon Family. It’s been a pleasure to see the program build to what it is today and to be a part of something very special. In the end, it’s about the friendships that have developed along the way that have changed our lives.”