In January 2019, Missouri Western entered the fifth year of its five-year Centennial Capital Campaign. Kim Weddle ’00, director of Development, said that although it has been a successful campaign, there is more work they want to accomplish. 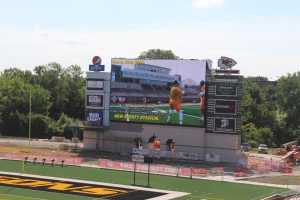 An early deferred gift of $10 million from an alumnus who lives in St. Joseph and wishes to remain anonymous kicked off the campaign in 2015. The Foundation also received a $1.5 million pledge from Mosaic Life Care to endow a professorship in the field of population health. Fiona Sansone was hired for the Mosaic Professorship for Population Health, the first endowed professorship in Missouri Western’s history. 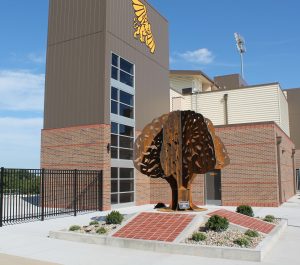 Just this past April, a $1 million gift from University supporter Drew Brown brought the campaign total to $30,448,759 in outright and deferred pledges and gifts, exceeding the initial celebration goal of $20 million. (See Drew Brown pledges $1 million gift, next page.)

One of the campaign’s successes was the renovation of Spratt Memorial Stadium, which was identified as an urgent need in the University’s Comprehensive Master Plan in 2014. Thanks to a combination of public and private support, the stadium reopened in 2016 and included new turf for the field, moving the visitor side bleachers closer to the field and replacing the seating on the home side. Steven L. Craig donated funds for an extra-large video scoreboard and the field was named Craig Field in his honor.

A three-story building was also part of the project, and it features a new concourse area with a ticket office, team store, two concession stands and larger restrooms. There is also a new Stadium Club, which is two to three times larger than the previous space.

The second floor houses individual suites with both indoor and outdoor seating and a serving area, in 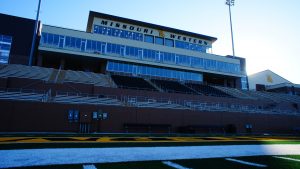 addition to restrooms, a full kitchen and a Hall of Fame room. The third level includes a control room for the video board, a coaches’ suite and a press box.

A new Victory Plaza was also created between the stadium and the Griffon Indoor Sports Complex as part of the campaign, and 274 engraved bricks have been sold since it was built. Bricks are still available for purchase to support the campaign.

In 2018, the Bill Snyder Pavilion in Spratt Stadium was dedicated, thanks to a gift from Steven L. Craig. The two-level area offers a great gathering and tailgating space for fans.

Last year, an anonymous donor funded an upgrade to the Looney Complex arena, which included all new seating and bleachers, paint and new graphics.

A renovation and expansion of Potter Hall was one of the original goals of the campaign, and progress has been steady on that project since the campaign began. Potter Hall, which houses the School of Fine Arts, has received several improvements, including an addition of a percussion studio and restrooms. Additionally, thanks to capital improvement funds from the state and a donation of the 2015-16 membership dues of the Missouri Western Arts Society, several common areas were updated, and there were improvements to the heating and cooling systems.

Brown’s gift will help fund a planned addition to Potter Hall which will be named the Drew H. Brown Arts Annex when completed. Work on the annex will progress as funds are raised.

“The Centennial Capital Campaign has already had a transformative effect on our campus, with facility improvements, a new academic program and more,” Weddle said. “It’s vital that we sustain this momentum through the next several months, so we can continue transforming lives for decades to come.”