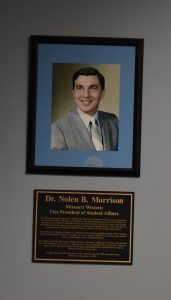 In 1967, Dr. Nolen B. Morrison was the first person hired by Dr. M.O. Looney, who was president of what was then Missouri Western Junior College. Dr. Morrison’s first position was head of Academic Affairs, and five years later, he was named Vice President of Student Affairs. He was serving in that role when he passed away in December 1983 at the age of 54.

Dr. Looney, who was a lifelong friend of Dr. Morrison, called him a valuable member of his team who was willing to do whatever was asked of him. That team worked tirelessly in the development of the four-year college and the construction of the new campus.

“He was honest and a hard worker,” Dr. Looney said. “He was a great member of our team, and he worked wherever he was needed.”

As Vice President of Student Affairs, Dr. Morrison was responsible for the areas of Admissions and Records, Registrar’s Office, Housing, Financial Aid, Health Services, Dean of Students, Counseling and Testing, Placement and Off-Campus Services, and Traffic and Safety. Students from his tenure may remember that he was the one who read their names as they crossed the stage at the Commencement ceremony.

Dr. Morrison, a native of Gainesville, Missouri, spent his entire career in education. After serving in the U.S. Marine Corps, he earned bachelor’s degrees in biology and health, physical education and recreation from Southwest Missouri State University (now Missouri State University) and he began his teaching career in a one-room schoolhouse in Gainesville. Dr. Morrison went on to become a driver’s education teacher, basketball coach and high school principal, serving as principal of Gainesville High School for eight years. He earned master’s and doctorate degrees in education administration from the University of Arkansas before joining the Missouri Western administration in 1967.

Dr. Morrison’s son, Brad, remembers his father as being very involved in campus life and “extremely student-oriented. He was always helping students reach their goals.” But Brad said his father never wanted to be in the limelight and always remained in the background.

“He was a very patient, Christian man with a lot of Southern hospitality. He was always looking for ways to help, even if you were a stranger.”

Brad said his father had a great love of the outdoors and was an avid hunter and fisherman. He was seven years old when his father was hired at Missouri Western, so he feels like he grew up on campus.

“I remember Chris (Looney) and I swam in the pool a lot. Chris and I would chase chipmunks all the way over from his house (which was on campus) to the pool.”

Dr. Morrison battled and beat lymphoma twice, and had been in remission for about five years by 1983. On December 10 of that year, he was driving over to one of his favorite hunting grounds near Kirksville, Missouri when he passed away.

At the time of his passing, he was survived by his wife, Melva, three children, Dan, Brad and Michelle; and a granddaughter.