It all started when Austin Wilcox of Kansas City, Missouri was doing his laundry one day. He threw a 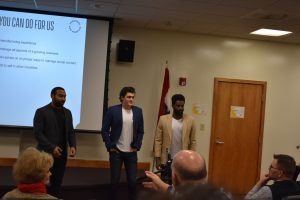 Tide POD®  in his washing machine and went upstairs to make a protein drink. He accidentally spilled the powder and made quite a mess in his kitchen.

That was when he thought to himself, why doesn’t somebody make a pod for protein drinks? That thought was immediately followed by, why don’t I?

So he called Wondabeka Ashenafi to pitch the pod idea. Wilcox and Ashenafi, friends for about four years, had been working together on a different idea for a business, and Isaac Collins ’11, a fellow church member and owner of two Yogurtini® stores in Kansas City, Missouri, was advising them.

Ashenafi and Collins liked the pod possibilities, and the three formed SERV Nutrition 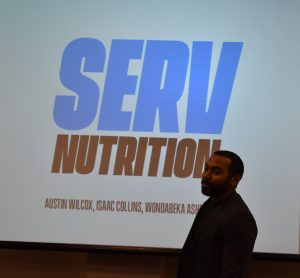 about two years ago to develop the idea. Last November, they launched the company’s first product – a whey protein powder in a 100 percent food-grade pod that readily dissolves in liquid.

Collins, who graduated with both management and marketing degrees from Missouri Western, said the pre-measured pod addresses and solves the problems with current protein powders – they often come in large containers, they can be messy, it’s easy to improperly measure the powder and the container is not really environmentally friendly. It’s also inconvenient to take on the go, and he says their pod is “all about convenience.”

Developing a health-related product was important to the three because all three played college sports and continue to stay active. But it was also essential that the company have a service component.

“This is the most important part for us,” Collins said. “We wanted to build a company that would outlast us. Because of my faith, if the company is not about service, I don’t want to do it.”

So they teamed up with Feed My Starving Children, a nonprofit that created MannaPacks that offer nutrition to children overseas. With every SERV Nutrition purchase, the company purchases a MannaPack that is shipped to children in Uganda.

“We wanted to create a successful business, but it’s not successful if it’s not helping people,” Wilcox said.

“It just makes sense to do the right thing,” Ashenafi added.

Collins, who played football for the Griffons, purchased a Rocky Mountain Chocolate Factory in 2012 as part of Missouri Western’s franchise development program. He ran the store in Williamsburg, Iowa for four years before he sold it in 2016 and bought the two frozen yogurt stores in Kansas City.

“Even as a kid, I knew I always wanted to be my own boss, but I figured I’d be an owner around age 30 or 35,” Collins said. “Missouri Western got me kick started, and I was an owner at age 23. That program literally changed my life.”

SERV Nutrition is currently operating out of a warehouse in the West Bottoms district in Kansas City, and Wilcox said they have enough space for friends to use it for work, as well. Their pods are for sale in stores around Kansas City and St. Joseph, and online sales (servnutrition.com) are booming, he said.

“We’re ecstatic about where we are with the business, I couldn’t have imagined a better launch,” Wilcox said.

The three are working with a lab to develop more products, such as a vegan blend, meal replacement and more flavors, and they want to see the company grow.

“People always ask, ‘why isn’t anyone doing this?’” Wilcox said. “But instead of just asking that, we decided to do it ourselves.”