1970s
Dr. Ronald Hestand ’71 has a Master of Science in Counseling Psychology from Northwest Missouri State University, a Master Of Science in Marriage and Family Therapy, an Ed.D in Counseling Psychology. He received ordination as a Religious Science Practitioner and as a Religious Science Minister. He taught psychology, sociology, and related subjects at South Florida Community College and was awarded Outstanding Instructor, and spent nearly 40 years as a forensic and prison psychologist. He received a Who’s Who’s Outstanding Life Time Achievement Award.
Dr. Hestand founded the Quantum Healing Center for Positive Spiritual Living (Facebook page is Quantum Healing). He also published a book, “Neurotheology and Quantum Physics Prove Unity Principles Work,” and is now writing a second and expanded edition of that book. He is a certified hypnotherapist and a certified Law of Attraction life coach. While working at the Okeechobee Correctional Institution, he designed a Sex Offender Treatment program what was subsequently adopted by several other Florida prisons.
James Sheehan ’78 was promoted to executive vice president and chief financial officer at Hormel Foods Corporation.
1980s
Tracy Streeter ’85 joined Burns & McDonnell, providing consulting and project development support for water resource agencies and municipalities. Prior to joining Burns & McDonnell, Streeter served 33 years in positions related to Kansas water resource management. He retired as director of the Kansas Water Office in December 2018.
Pat Modlin ’88 joined the Commerce Bank Board of Directors. Modlin retired from Cerner and owns and operates Bottlecage Investments and Felix Street Gourmet in St. Joseph, Missouri.
2000s
Rebecca (Becca) Stallard ’01 co-wrote a feature-length movie with Jason Hudson and Joe Brennon, “Christmas at the Chateau.” A premiere was held at the Missouri Theatre in St. Joseph, Missouri, in December. It is a modern-day Christmas movie filmed at the Shakespeare Chateau, Cafe Brioche, and the downtown library, all in St. Joseph.
Melissa Fowler ’06, ’14/’16 received the Kansas City Region 2018 March of Dimes Nurse of the Year Award for Public Health/Ambulatory Care in November 2018. Fowler is with th 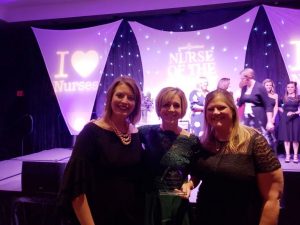 Melissa Fowler ’06/, center, with Rachel Pepper ’03 and Jaime Bartley ’17 at the awards ceremony.

e University of Kansas Health Systems.
Melissa Fowler ’04/’13/’16 received the Kansas City Region 2018 March of Dimes Nurse of the Year Award for Public Health/Ambulatory Care. Fowler is with the University of Kansas Health Systems.
Elijah Haahr ’05 was named Speaker of the Missouri House of Representatives for the 2019 legislative session. According to the National Conference on State Legislators, Haahr is the youngest Speaker in the country at 36 years old. He will also be the first speaker in state history from Springfield. Haahr was elected to the Missouri House in 2012, and has served the past two years as the Speaker Pro Tem.
LeeAnn (Schuster) Fall ’06/’09 and her husband, Drew, announce the birth of a son, Hudson Robert, born in October 2018.
2010s
Becky Wiederholt ’13 graduated from Park University with her MBA with a concentration in Human Resources Management. She is a member of the Missouri Association of Workforce Development and the Society for Human Resource Management.

In Memoriam
We remember those who have passed away. If you want to include someone in this listing, please call (816) 271-5651, mail the information to Diane Holtz, Missouri Western State University, 4525 Downs Drive, St. Joseph, MO 64507, or email holtz@missouriwestern.edu.