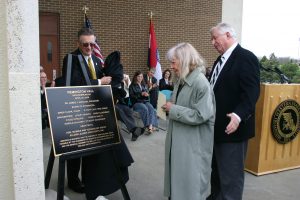 Patsy and Wes Remington with Dr. James Scanlon at the groundbreaking of Remington Hall in 2008.

She was born on August 19, 1932, to Charles O.A. and Marian Irene (Jones) Smith in Mound City, Missouri. Remington was a graduate of Central High School in St. Joseph, Missouri and attended Southern Methodist University, Dallas. She graduated from Missouri Western in 1979 with a Bachelor of Science in Social Work. In 1953, Patsy married Wes Remington, who survives.

In 2007, Patsy and Wes provided the lead gift for Missouri Western’s renovation of Agenstein Hall and the construction of Remington Hall, which houses the University’s science and math facilities. At the time of their gift, it was the largest gift in the history of Missouri Western. Remington Hall is named in their honor, and they received an honorary doctorate degree from Missouri Western in 2009.

Patsy and Wes were also instrumental in developing the Remington Nature Center in St. Joseph. Additionally, with Patsy and Wes’s leadership, Heartland Health (now Mosaic Life Care) partnered with the Mayo Clinic of Scottsdale, Arizona to establish the Tele Stroke Network in 2011.

Patsy was a member of Wyatt Park Baptist Church, Panhellenic Council and a sustaining member of the St. Joseph Junior League.