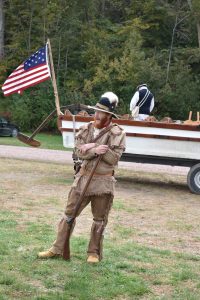 For two alumni who earned history degrees from Missouri Western, an opportunity to follow in the footsteps of Meriwether Lewis and William Clark’s Corps of Discovery expedition was too good to pass up. This past fall, Sterling Fichter ’13 and Garrett Holtz ’09 gathered with several other Lewis and Clark buffs to reenact 125 miles of the expedition’s 1806 return on the Missouri River.

In character and period costume – Holtz as Sgt. John Ordway and Fichter as John Colter – the group started their six-day journey on the river below Fort Randall Dam near Pickstown, South Dakota and ended at Ponca State Park near Ponca, Nebraska. Along the way, they presented 11 programs to school groups and the public, speaking to approximately 800-1,000 people.

Holtz, who teaches middle school social studies at St. Francis Xavier School in St. Joseph, Missouri, said he enjoyed talking to the school groups about Lewis and Clark and seeing the children get excited about history. His presentation was about the expedition’s provisions.

Prior to the trip, Holtz had made portable soup, pemmican (a Native American food) and elk jerky for his presentations. The portable soup, he said, was “survival food and the most important provision Lewis and Clark brought along.” 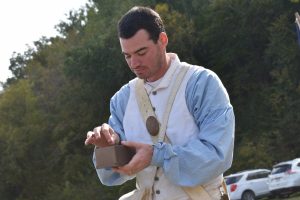 The reenactors ate 21st century food on their trip, but one evening they cooked some portable soup over the campfire and added some rice and jerky to it. Holtz told the students that the 2018 crew disliked it as much as the 1806 crew did. The first time Lewis and Clark’s crew tried it, he said, they killed a horse and ate it instead. “The idea was to mix the portable soup with something else, but they didn’t have anything.”

Fichter, who farms and works construction in southwest Iowa, said he was nervous about having to give a presentation, but he was surprised by how much he enjoyed talking about his character to the students.

To prepare for the trip, he made knives and powder horns, and tried to make his “factory-production gun not so factory-like.” He also made three pairs of pants – one out of deer hide, one out of elk hide and one cowhide in preparation for the trip (“elk is the best”). He told the students about Colter, who is considered the first mountain man. In 1807-08, Colter became the first known person of European descent to enter the region that is now Yellowstone National Park. Fichter also spoke about fur trappers of the time, beaver hats and the flintlock muzzleloader he carried. 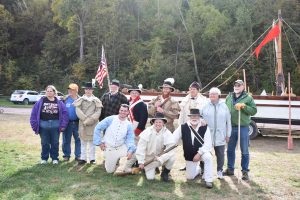 The re-enactors and their support crew.

The programs also featured the boat builder who talked about the replica pirogue, the 15th boat of that type he had built. He is considered one of the nation’s leading authorities on boats of the Lewis and Clark era, Fichter said.

Another one of the crew talked about how the explorers navigated by the stars, and a third talked about the mission of the Corps of Discovery – to explore the lands that were part of the Louisiana Purchase, find the headwaters of the Missouri River, establish contact with the Indian tribes and study the flora and fauna of the new United States territory.

The presenters also passed out coins with a likeness of Thomas Jefferson that were replicas of those that Lewis and Clark gave to Indian chiefs along the way. Those in attendance also had the opportunity to board and explore the 42′ x 9′ boat, complete with a cannon.

Both Fichter and Holtz said they were glad they got to experience a bit of history. They enjoyed the camaraderie of the crew, navigating the boat, wearing period clothing and camping in 1800s-style tents (think buffalo robe and wool blankets). Fichter said the undeveloped stretches of the river made him feel like he was seeing the same scenery as Lewis and Clark saw. The only downside of the reenactment was the heavy rains prior to the trip. Park rangers would not allow the crew to return to the high and rapid river after day two.

Also as part of their journey, the 2018 crew read excerpts from the 1806 journals that matched their location and stopped to visit the Lewis and Clark historic sites along the way. They stopped at Spirit Mound Historic Prairie in South Dakota and Old Baldy in Nebraska, where the expedition had trapped a “barking squirrel” (a prairie dog) and sent it back to President Thomas Jefferson.

Holtz said he was happy to share his experiences with his students when he returned home.
“As a student of history, it was great to be able to put ourselves in the Corps of Discovery’s shoes, seeing it and experiencing it somewhat like they did,” Fichter said.

Corps of Discovery Glossary
Muzzleloader – A firearm into which the projectile is loaded from the muzzle of the gun (the open end of the gun’s barrel). It uses flint as its firing mechanism.
Pemmican – a paste of dried and pounded meat mixed with melted fat and other ingredients (Holtz used homemade jerky and blueberries).
Pirogue – A flat-bottom river craft. The Corps of Discovery used the term for two of their boats.
Portable Soup – a type of dehydrated food used in the 18th and 19th centuries; a precursor to bouillon cubes.
Spirit Mound – a prominent hill on the Great Plains in South Dakota. The Indians considered the mound the home of dangerous spirits or little people. Members of the Corps of Discovery climbed it on Aug. 25, 1804.