Athletics Hall of Fame Class of 2018

Athletics Hall of Fame Class of 2018

Five individuals became the newest members of the Missouri Western Athletics Hall of Fame during Hall of Fame Weekend festivities in October, presented by Rogers Pharmacy. 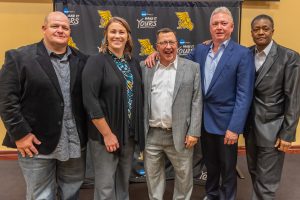 Steve Craig
Meritorious Service
Mr. Craig’s contributions to both the University and the athletic department have been numerous. The namesake of the Craig School of Business on campus and Craig Field, Steve Craig’s financial contributions paved the way for the video board during the renovations of Craig Field at Spratt Memorial Stadium. Mr. Craig was also the exclusive donor and created the Bill Snyder Pavilion which capped the complete renovation of Craig Field at Spratt Memorial Stadium. His innovative entrepreneurship program in the Craig School of Business has helped Missouri Western graduates open over 30 stores across the country with sales in excess of $7.5 million.

Jenny Marr ’98
Women’s Basketball (1995-97)
An instrumental part of building a consistent winning tradition at Missouri Western, Jenny Marr was a two-time All-MIAA selection, earning first team and Co-MVP honors in 1997. Marr’s 507 points in the 1996-97 season are the 10th most ever scored by a Griffon. That season, Marr shot 58.8 percent from the field, the fifth best percentage ever by a Griffon. Marr’s career field goal percentage of 57 percent is second best all-time at Missouri Western. In 1997 she was also named honorable mention Bulletin All-American.

Phillip Nelson ’01
Football (1996-99)
Nelson started 44 consecutive games at center and was twice named first team All-MIAA. He was a recipient of the Chris Faros Scholarship and was named to the academic honor roll three times. Nelson received his bachelor’s degree in history with a teaching certificate and master’s degree in physical education with an emphasis on athletic administration. Since 2003, Nelson has been a football coach and teacher at Arlington High School in Arlington, Texas since 2003.

Dave Slifer
Head Coach, Women’s Basketball (1995-2004)
Slifer is the all-time wins leader at Missouri Western, going 206-69 and 115-33 in his nine seasons in St. Joseph. He was named MIAA Coach of the Year three times, leading the program to two MIAA regular season championships and two MIAA tournament championships. After finishing seventh in the MIAA in his first season, Slifer’s Griffons had a string of seven-straight third place or better finishes. Missouri Western advanced to the NCAA tournament in each of each of his final eight seasons at Missouri Western. Slifer left Missouri Western to become the head coach at Central Missouri where he has been since 2005. Last season he led the Jennies to an NCAA Division II National Championship and the best record in program history. Slifer enters his 30th season as a collegiate head coach ranked fourth in wins among active Division ii head coaches and 22nd across all NCAA divisions with 665 career victories. His .736 winning percentage is 13th among all active NCAA head coaches.

Dana Wertz ’07
Softball (2004-07)
Wertz was a work horse for teams that turned around the Griffon Softball program. As a first team All-MIAA and second team NFCA All-Region pitcher in 2005, Wertz led Missouri Western to its first-ever NCAA Regional appearance and the first of three straight for the then upstart program. Wertz was also named honorable mention All-MIAA in 2006 and was a three-time member of the MIAA Commissioner’s Academic Honor Roll. Wertz’s name appears over and over in the Griffon Softball record book, ranking third in career wins (60), innings pitched (656.2) and complete games (70). She ranks fourth all-time at MWSU in career strikeouts (479) and saves (6) and fifth in career ERA (2.44) and shutouts (16). Her single season records for appearances (51, 2005), starts (41, 2005) and innings pitched (261, 2005) still stand.