When Pat Modlin ’88 retired in 2017 and he and his wife, Terri, renovated a building in downtown St. Joseph, he began to get involved in downtown initiatives. The more he learned about the area, the more he wanted to know. 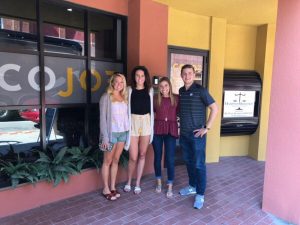 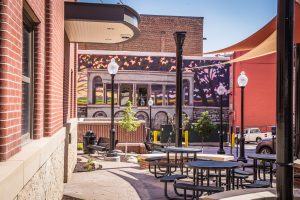 The study involved creating an inventory of all the buildings and businesses, analyzing census data, sales tax information, downtown’s digital presence and more. The students focused on the city’s Community Improvement District, a 47-block area formed in 2011 as a special taxing district to provide funding for capital improvements, beautification, marketing and business assistance in the downtown area. The first two weeks, Dillon and Hagen said, were spent physically walking all over the 47 blocks. 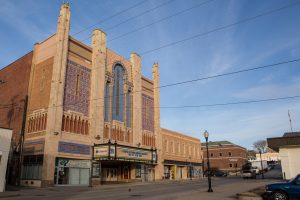 Modlin, who owns Room 108 and the Felix Street Gourmet, met with the interns weekly, and an advisory group he created met with them each week, as well. Members of the advisory group included Dr. Logan Jones, dean of the Craig School of Business & Technology, and Annette Weeks ’87, director of Missouri Western’s Center for Entrepreneurship.

“I gave the students direction but generally they solved their own problems,” Modlin said.

He said he wanted to make sure the students had a meaningful internship, and he was pleased with the experiences they had. They communicated well with each other and worked as a team, and they interviewed several people in the community, including Patt Lilly, St. Joseph Chamber of Commerce, Bill McMurray ’70, St. Joseph’s mayor, and City Manager Bruce Woody.

The internship also included a trip to Weston, Missouri, to speak with its Chamber representatives and downtown business owners. They also researched downtown districts in Omaha, Nebraska; St. Charles, Missouri; and Lawrence, Kansas.

As part of their study, the interns divided St. Joseph’s downtown into different districts, such as “the 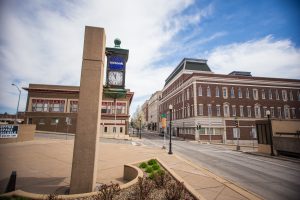 heart (around Felix Street Square),” “riverfront,” “industrial” and “uptown.” They also mapped every building, identifying all vacant spaces. If a building was occupied, it was classified according to its occupancy, such as food/beverage, retail, government, etc.

“Everyone was impressed with their presentations,” Modlin said. “They were prepared and very professional.”

Modlin also formed a downtown strategic planning committee, and that group is using the intern report as a guide.

One important finding was the number of disparate groups that were working to improve St. Joseph’s downtown. Students found there were four different groups, each working on their own set of goals. Modlin said the goal of the strategic planning committee is to bring all the groups together so they can develop a comprehensive master plan for the area, and he is optimistic that that will happen.

“Unfortunately, before I did the internship, I never came downtown,” said Dillon, a St. Joseph native. “But we feel there is so much potential. There are a lot of people that are behind the downtown.”

Another recommendation encourages the downtown businesses and Missouri Western to collaborate more. Some work has already begun toward that goal (see “Student Government Association creates two community initiatives”). Additionally, a marketing class taught by Dr. Phillip Frank is partnering with the downtown to help establish one main downtown website, and more efforts are in the works.

And, one of the focuses of the University’s strategic plan is to create more partnerships between campus and community and strengthen the current ones.

“This was such an amazing experience being able to utilize what I learned in class,” Hagen said.

“The interns were able to provide some insights that people weren’t aware of or didn’t realize the extent of,” Modlin said. “I was very pleased. They exceeded my expectations.”

Recommendations for downtown St. Joseph
The following are the priorities for the downtown strategic planning committee, based on the recommendations from the interns’ summer 2018 study:

Student Government Association creates two community initiatives
Missouri Western’s Student Government Association recently became involved in two initiatives in collaborative efforts with the St. Joseph community – participating in the bike-share program and Third Thursdays.
In the spring of 2018, the Student Government Association voted to purchase 18 bikes and three bike racks in a partnership with St. Joseph’s Pony Express Bike Share program that began in August 2017.
The program makes bikes available free for anyone’s use across the campus and community. Riders can return them to the racks where they picked them up or to any program rack in St. Joseph. The bike racks on campus are located near the Blum Union, the Hearnes Center and the Baker Fitness Center.
Student Evan Banks, assistant director for external relations for SGA, coordinated the University’s involvement in the bike-sharing program.
Banks was also responsible for creating Third Thursdays (#griffsgodowntown) that began this past fall. He and the Student Government Association worked with several downtown businesses that are providing special deals and promotions to those with a Missouri Western student ID the third Thursday of each month.
“The goal of Third Thursdays is to support a vibrant culture of community between two critical parts of St. Joseph – downtown and Missouri Western,” Banks said. He started the initiative because he wants to see University students head downtown at least once a month.
The first event had 15 businesses participating, and Banks said they were continuing to add more each week. Find out more information at St. Joe Third Thursday on Facebook.