Last year, Jaime Bartley ’17 was part of a University of Kansas Health System team that made history. Bartley, organ transplant manager for the kidney, pancreas transplant and living donation programs, led a team of transplant coordinators who coordinated a five-pair kidney transplant chain, which had never been done before in the Kansas City metropolitan area. Surgeons operated on five donors and five recipients over two days.

The chain, she said, started with an “altruistic” donor, who was not a match for his friend, was ready to 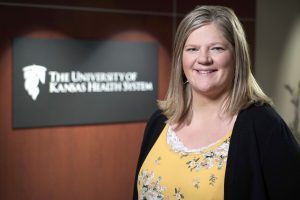 give his kidney to a stranger. The team looked to its program’s transplant registry of patients awaiting transplant and eligible living donors for possible kidney transplant matches. The chain ultimately included three donors who were incompatible to their intended recipients and one pair who was compatible and chose to join the chain, enabling more exchanges of the gift of life.

“While the logistics of coordinating this transplant chain can present unique challenges, our nurses, doctors and multidisciplinary team members were truly honored to care for these patients throughout their evaluation and recovery, and for years to come,” Bartley, a native of Omaha, Nebraska, said in a press conference.

The roots of the historic accomplishment, she said, actually started in her last semester in Missouri Western’s Master of Science in Nursing: Healthcare Leadership program. For her final capstone project, Optimizing a Living Donor Program, she and one of her colleagues, Melissa Fowler, a Missouri Western alumna who earned a Bachelor of Science in Nursing in 2013 and her master’s in healthcare leadership in 2016, examined all aspects of the transplant programs Bartley was responsible for. They studied ways to remove barriers, improve quality and outcomes for patients, and increase living donations. Changing the processes and asking the right questions led to the five-pair transplant chain. Bartley confirmed that the University of Kansas Health System has since performed two additional kidney transplant chains, one in August 2018 and one this past October.

She said they wanted to help patients better understand that they didn’t need to find a donor that was a match for them. If they found someone willing to donate, the team would work to pair living donors and recipients to maximize the number of transplants and the best match for each patient.

“A living donation is the best outcome for a recipient when compared to a deceased donor transplant or dialysis.”

Bartley, who earned her Bachelor of Science in Nursing from the University of Nebraska Medical Center in Kearney in 2003, said she had thought about getting a master’s for a long time and researched several programs before choosing Missouri Western in 2013.

“I wanted it to be worth it, a good value and affordable,” she said.

Missouri Western’s program also offered the flexibility she needed by offering courses on campus, in Liberty, Missouri or the option to join the class via webcam. Many courses were also a hybrid of classroom and online.

“It exceeded my expectations,” she said. “The professors were supportive and truly treated me as a professional.”

Bartley began working with transplants (“the most rewarding work in nursing I have ever done”) when she became a clinical nurse transplant coordinator at the University of Nebraska Medical Center in Omaha in 2007.

“A living donation is the most beautiful decision a donor can make,” she says. “If you have it in your heart to donate, call us and we can get you the information.”