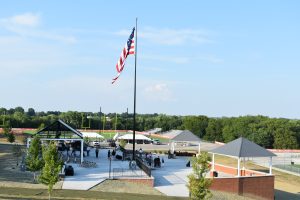 The pavilion was built and donated by Steven L. Craig, the benefactor for whom Craig Field and the Craig School of Business are named. It was Craig who proposed naming the pavilion for Snyder.

Craig said he wanted to honor Snyder, a native of St. Joseph who attended the St. Joseph Junior College (predecessor to Missouri Western), because the coach was responsible for the most remarkable turnaround in all of Division I.

In 1989, Snyder took over a struggling Kansas State program that had just become the first Division I program to lose 500 games and had gone winless in two consecutive seasons. In a short time, he turned the Wildcats into a national championship contender that advanced to 11 straight bowl appearances and tallied six 11-win seasons over a seven-year stretch. He retired in 2005, but returned to the Kansas State sidelines in 2009, adding his seventh 11-win season and second conference championship in 2012. Overall, his record stood at 210-110-1 at the end of the 2017 season.

“I am truly humbled,” Snyder said at the dedication ceremony July 12. “I know it’s what everyone says, but I mean it. The St. Joseph Junior College was truly the springboard and the foundation for the entirety of my undergraduate education and through my 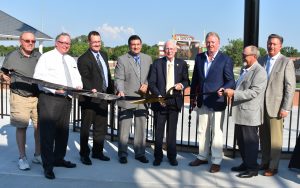 Snyder said he attended the University of Missouri-Columbia his first semester of college, but came home to the junior college, which gave him a “re-start.”

“It opened doors for me to have the opportunities I’ve had. St. Joseph will always hold a special place in my heart, and Missouri Western likewise. I am so proud of this university.”

The pavilion, on the west end of Craig Field opposite the video scoreboard, features two different levels for hosting outdoor events and an 80-foot flagpole displaying a 30-foot by 20-foot American flag. The pavilion features a bronze plaque honoring Snyder, as well as a plaque to honor students and alumni who have served in the United States military.

“Several years before the video board (completed in 2016), I envisioned a grand gathering space on this hilltop,” Craig said at the dedication ceremony. He said the pavilion creates a “bookend” to the scoreboard.

Snyder is the son of Marionetta Snyder and grandson of George and Marie Owens. He graduated from Lafayette High School in 1958. After attending St. Joseph Junior College, Snyder received his bachelor’s degree from William Jewell in 1963. He earned his master’s from Eastern New Mexico in 1965.

He has been active in many organizations and has returned to St. Joseph many times for fundraisers and events supporting education and the YMCA.

“Coach Snyder has never forgotten his humble beginnings or his hometown, and he has continued to give back to this community over and over again,” Craig said.

Snyder and his wife, Sharon, have two sons and three daughters. They also have eight grandchildren and one great-grandson.