Life Changes in an Instant

Life Changes in an Instant

When Sarah (Cool) McCauley ’08 was getting ready to play the piano at her church’s service on New Year’s Day in 2017, she never dreamed that by the time the service was over, her life would be changed forever and just one year later, she would be married and living 3,600 miles from home.

The change agent was the guest speaker at the First Baptist Church in St. Joseph that 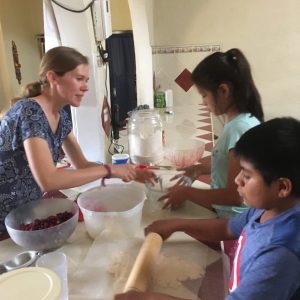 morning. Cole McCauley, assistant director at the Casa de Mi Padre (Home of My Father) Orphanage in Santa Cruz, Del Quiche, Guatemala, spoke about his mission work there, asking for support and prayers from the church members.

Sarah enjoyed speaking to Cole after the service, and they realized they had grown up less than a mile apart. She immediately signed up for the orphanage’s online newsletter, and of course, she and Cole became friends on Facebook that day.

They continued to keep in touch until Cole returned in May, when they when out on a few dates and met each other’s families. In July, Sarah spent a month serving at the orphanage.

“When it was time for me to leave, we decided to do lots of praying and some fasting to seek God’s will regarding our relationship,” Sarah said.

They continued to keep in touch long distance, and when Cole returned to the United States in September, he came with a wedding proposal. The couple was married Jan. 14 of this year.

It was a whirlwind full of “God’s blessings” and a lot of Spanish lessons all along the way.

After a Hawaiian honeymoon, Sarah and Cole returned to Guatemala and began their missionary work as a couple, she as a “Cole-acclaimed” co-assistant director.

They are responsible for raising their own financial support, so they travel back to the U.S. every three months to speak at churches and share the story of their mission work.

Cole, who graduated from Savannah High School, visited the orphanage for the first 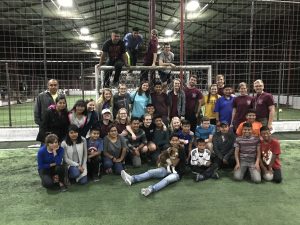 Missouri Western’s Baptist Student Union on their mission trip to Casa de Mi Padre. Cole and Sarah are on the right.

time in 2014 during a weeklong spring break mission trip with Missouri Western’s Baptist Student Union (a group from the BSU returned in 2018). He went back in 2015 for three months stay to determine if it was a place where God was calling him to serve, Sarah said, and he began working there full time in January 2016.

The orphanage is affiliated with Midland Ministries, a nondenominational Christian organization based in St. Joseph, Missouri. There are usually about 20 children living there, and many remain for several years.

“We teach them about the Bible to help them overcome their tough past so they can have bright futures,” Sarah said.

The McCauleys rent a house and have hot and cold running water, which is rare in their village. Sarah says the electricity is fairly reliable, just dimming every once in awhile. They have access to a lot of good food, Sarah said, but they often ask groups who come down from the St. Joseph area to bring along some Kansas City barbecue sauce.

“The area kind of reminds me of the 1950s, there’s not much technology here and families do a lot together,” she said. “People are very friendly and more laid back than Americans.”

Sarah, who was homeschooled, graduated from Missouri Western with a music education degree. She started singing with the Griffon Junior Singers in seventh-grade, was in the youth orchestra in 10th-grade, and started playing the viola in the Missouri Western orchestra as a junior in high school. As a college sophomore, she began teaching violin through the Western Institute and was selected to play in the St. Joseph Symphony as a violinist.

After graduating, she was an adjunct violin teacher for Missouri Western, worked for the St. Joseph Symphony and the St. Joseph School District, and taught one semester at St. Joseph Christian School last fall.

And what does the future hold for the McCauleys? Sarah says their future is at Casa de Mi Padre. In fact, they are looking forward to a new resident in November – their baby!

“I prayed that God would help lead me into a career path that would be glorifying to Him and helpful to other people,” Sarah said. “We are amazed at how God used our past experiences to prepare us for working in an orphanage ministry in a foreign country.”