There’s a new look in the Department of Health, Physical Education and Recreation, making its hands-on labs more appealing and even more functional than before.

The Looney Complex now contains a new Personal and Commercial Fitness Lab and a remodeled Health and Exercise Science Lab with new equipment.

Dr. Justin Kraft, department professor and chair, said they wanted the new lab as part of 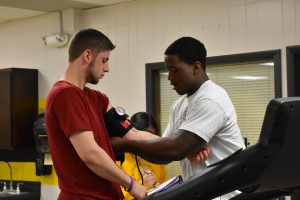 their personal and commercial fitness concentration in the physical education major that began last fall. At the same time faculty members in the department were planning the lab, Human Resources was looking for a location to hold its wellness programs, so the two areas collaborated to create the new space. Human Resources received funding from Blue Cross and Blue Shield of Kansas City to help pay for the lab. HPER contributed, along with the MWSU Foundation.

The Personal and Commercial Fitness Lab is located in Looney 114. The former classroom space has now been converted into a half classroom and half lab, with new flooring in the lab area and all new equipment: a treadmill, two elliptical machines and two exercise bicycles.

Dr. Kraft noted that there are several hands-on, practical courses as part of the personal and commercial fitness track, and the labs are a large part of those courses.

The Health and Exercise Science Lab, used for high performance exercise testing in a 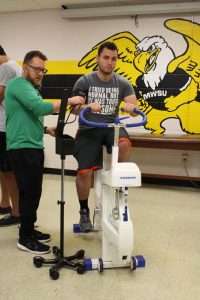 number of courses, is in the same space as before, but with a completely updated look and open feel. Wall dividers were removed and a large television and projection system are now part of the lab, along with two new EKG monitors and a new, high-tech treadmill. This past summer brought the addition of a metabolic cart, which is used by personal trainers to create training programs for their clients.

“We’re undertaking serious scientific endeavors, and now we have great new equipment to do that. This shows that we value what happens in this space,” Dr. Kraft said.

The lab upgrade cost more than $50,000. The department has been saving up for several years, and Dr. Kraft credited the fiscal management of the department’s former chair, Dr. Brenda Blessing, in starting the planning. “An investment in the equipment is an investment in our students,” he said.

He says he now makes sure prospective students tour the two new spaces. “It’s an important recruiting tool. It shows them and their parents that we are going to provide the resources they need to learn their profession.”