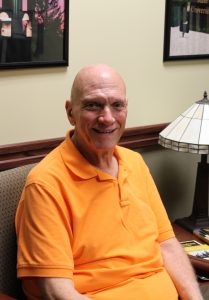 Barry Greenwald estimates he taught around 10,000 students in his more than 25-year career as an accounting professor at Missouri Western. His love for those students led him recently to include the University in his estate planning.

“I wanted to do something for the students more than anything,” he said. “It’s really showing appreciation for what the students did for me.”

Barry, who was named professor emeritus of business when he retired in 2000, established the Barry Greenwald Endowed Textbook Scholarship to help future students pay for textbooks. He remembers how expensive textbooks were for students when he was teaching and thought that would be a great way to help students. Preference will be given to business majors.

After graduating from the University of Denver and becoming a CPA, he worked for a time in Denver. He then taught at Southeast Missouri State University in Cape Girardeau for four years before joining the Missouri Western family in 1974.

Barry said when he was teaching, it became a habit to sit in the hallway prior to his class time, and invariably, students from his class would approach him with questions or to request explanation of a lesson.

“I really enjoyed working with students and explaining the reasons why we did things; it was fun to see them learn.” He is very proud of the success of his students, as well.

Barry chose to make Missouri Western part of his estate because, when he passes away, he wants to be remembered as giving something to the University.

“I can’t call Missouri Western my alma mater, but it was mine for 27 years,” Barry said. “It’s where my heart is.”